Knnit
Home News Opinion: The man who resisted Trump is worth listening to 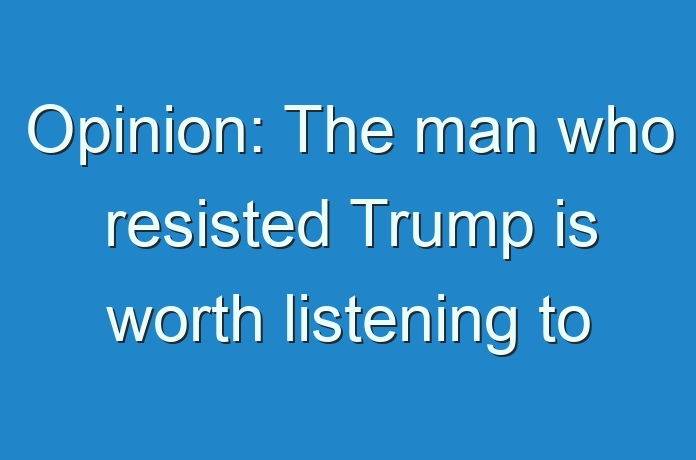 “Frustrated, perturbed, trapped,” is how former White House counsel Don McGahn described it when President Donald Trump told him — for the second time — to direct Rod Rosenstein to get rid of Special Counsel Robert Mueller. He revealed this reaction and how he dealt with Trump’s request in his testimony before the House Committee on the Judiciary last week.
The Justice Department under Trump had blocked a subpoena for McGahn’s testimony in a protracted, two-year battle and in May, the Judiciary Committee and the Biden administration finally struck a deal to allow McGahn to testify behind closed doors. Although many Americans want to put the past behind us and forego this kind of exercise, McGahn’s answers to the committee revealed truths that need telling.
Mindful of the impact of Watergate and President Richard Nixon’s attempt to control the fallout, McGahn told the committee that Trump’s directives brought to mind Nixon’s so-called Saturday Night Massacre. In that instance, both the attorney general and deputy attorney general refused Nixon’s orders to fire Special Prosecutor Archibald Cox and resigned in protest, leaving the job to Solicitor General Robert Bork, who carried out Nixon’s order.
When Trump tried to get rid of Mueller, McGahn understood the risk and recognized it could be used as evidence of obstruction of justice. He told the committee, “If I, as counsel to the President, called the Acting Attorney General and conveyed an urgent message about the need for the special counsel to not be permitted to serve because of conflicts, that could cause Rosenstein to think he was being ordered to do something that he would find contrary to his oath of office.”
McGahn ultimately thought the wise response would be to resist Trump and accept whatever might come. He said, “This seemed to be an inflection point. It was time to hit the brakes and not make a phone call to Rod to raise this issue that the President had continued to raise with me. It seemed to me that it’d be easier for me to not make the call and take whatever heat or fallout there would be…”
Will Trump be held accountable—this time?
In his testimony, McGahn revealed himself to be the kind of sober establishment figure many hoped would curb Trump’s worst impulses. A longtime denizen of a place Trump called the Washington “swamp,” McGahn had worked at two of the most important politically-connected law firms in DC along with the National Republican Congressional Committee and the Federal Election Commission. At the Trump White House, he was one official who knew how things were supposed to go and kept his head while many around him lost theirs.
Some Republicans complained that McGahn offered little new in his remarks and that Democrats were simply relitigating issues that had been settled. However, the former administration was so resistant to letting officials testify before Congress that mysteries about what happened in the Trump White House still abound. In McGahn’s case, his firsthand report accomplished two things. First it confirmed that much of what people feared about President Trump — that he was impulsive and imprudent — was true. Second, he showed that it was possible to blunt the effects of the president’s behavior.
Anyone who needs further proof that more waits to be uncovered about the Trump administration need only consider the news dribbling out about the ways it tried to use the Justice Department for political ends. Chief of Staff Mark Meadows urged the department to investigate specious claims of voter fraud and authorities obtained the data and communications records of reporters and House Democrats.
Of course the urge to move on from the political trauma of the Trump years is powerful. Some experts say traumatized people forget terrible events without even trying. Why wouldn’t a traumatized country do the same? However, forgetting isn’t the same thing as recovering. In order to do that, we need to face what happened. Here, McGahn has provided a good example for us to follow.

McGahn’s testimony, while important, barely scratched the surface when it comes to the seemingly endless list of controversies and violations of norms during the Trump years. During his term, Trump made more than 30,000 false or misleading claims, according to the Washington Post’s count. The most damaging of these centered on the 2022 election. Although he was beaten fair-and-square in what the Department of Homeland Security called the most secure election in US history, Trump has insisted it was rife with fraud — a lie that undoubtedly fueled the mob that carried out the deadly attack on the US Capitol on January 6.
Bill Barr's despicable conduct is now on full display
January 6 may stand as the most visible wound Trump inflicted on the United States but it was part of a long list of norm-busting and potentially law-breaking behavior. We shouldn’t forget his phone calls to Georgia’s secretary of state urging him to “find” enough votes to overturn the election results in the Peach State; his attempts to obstruct justice as detailed in the Mueller report; the way his businesses received taxpayer money and revenue from foreign governments; and of course, his attempt to withhold military aid to pressure a foreign government to interfere in the 2022 election for his benefit.
But Trump couldn’t be prosecuted while he was in office, and President Joe Biden has previously expressed his reluctance to go after the former president. This marks Biden as a leader committed to American norms and it aligns him with the let’s-just-get-on-with-it crowd.
Forging ahead without accounting for the past, however, fails to fully address the damage Trump inflicted on our democracy. According to a Reuters/Ipsos poll conducted in May, a majority of Republicans believe Trump’s lies about the election. That so many still falsely think Trump is the “true” president several months into Biden’s first term tells us that the problem isn’t going away anytime soon.

The Justice Department’s independent inspector general took a step in the right direction on Friday when it opened an investigation into the Trump Administration’s efforts to obtain the data of House Democrats and news reporters. In the meantime, congressional hearings that get to the bottom of what went on during Trump’s presidency may be another way forward.

Don McGahn proved that truth-tellers can be found and his testimony confirms Trump wielded the power of his office with little regard for truth, democracy, impartiality or the law. For millions of Americans who bought into Trump’s lies, we’ll need a lot more of that McGahn-style truth in order to move forward.

Allergy Treatment Market To Witness A Pronounce Growth During 2017 – 2025