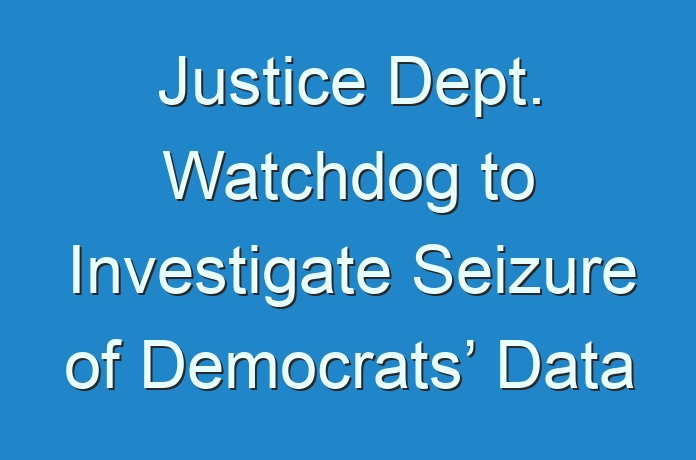 The Times also reported that prosecutors had struggled to develop information tying members of the Intelligence Committee or their aides to the leaks, but Mr. Barr, after he was sworn in in 2019, objected to closing the inquiry. The case was ultimately closed without charges.

A person close to Mr. Sessions said that he, too, did not know that the Justice Department had subpoenaed data belonging to members of the House Intelligence Committee and their staff and family. At the time, investigators were trying to identify the source of leaks about the Russia investigation; Mr. Sessions was recused from most matters related to Russia after he had spoken with the Russian ambassador during the 2016 campaign.

Rod J. Rosenstein, Mr. Sessions’s deputy, who handled matters from which the attorney general recused himself, declined to comment.

In this case, affiliates of the Intelligence Committee learned the full extent of the scrutiny only in May, after a gag order on Apple expired and the company notified individuals whose data had been turned over pursuant to the subpoenas.

But there were earlier signs of activity as well. The F.B.I. questioned Michael Bahar, a former House Intelligence Committee staff member, in the spring of 2022, according to current and former government officials.

A copy of the subpoena to Microsoft reviewed by The Times shows that the department was seeking records going back to April 2016 that might have tied the committee official to particular accounts, like information about who was using the account, with what devices, how they were logging on, from where and when, and other subscriber information given to Microsoft when the account was set up.

A Microsoft spokesman confirmed on Friday that it had received the subpoena but had also been subject to a gag order for more than two years that prevented the company from informing the aide about the seizure.

Meet the company behind the marketing of many famous artists