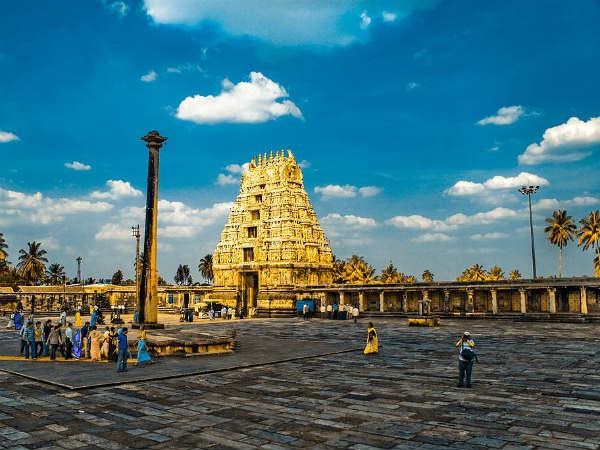 For the Vaishnava sect, Lord Vishnu is considered to be the supreme god.Lord Vishnu is considered to be among the five primary god forms by the AdiShankaraSmarta followers. This god, according to Vishnu Sahasranama is considered as the supreme soul (Paramatman) and supreme god (Parameshwara). He is also stated to be the all-pervading essence for all beings as well as the master of the future, present,and the past. He is the one who is said to support, govern & sustain the Universe, develops & originates all elements within. Since Vishnugod preserves & sustains the Universe, he is rightly referred to as‘Preserver of the Universe’.

Vishnu as per Puranas:

The Puranas have described Vishnu as having divine watercolour filled clouds, 4 arms, with each one holding a mace, lotus, wheel (Chakra) and conch (Shankha). He is also mentioned in the Hindu holy book ‘Bhagavad Gita’ as a Vishvarupa (Universal Form), beyond ordinary human imagination or perception.

LordVishnu is worshipped either in his 10 avatars or forms or directly as Lord Vishnu by Hindus across the globe. Krishna & Rama are two of the famous forms. Each Dasavatara is described by the Puranabharti. Among the 10 described principle Avataras, 9 are said to have already taken place in the past. Only one, that is Kalki, remains and is said to take place in the near future on completion of Kali Yuga. Such incarnations occur in all Yugas in cosmic scales. The stories told about the different avatars are unbelievable, unimaginable, and unthinkable. The purpose of the Lord to come in different avatars is mentioned clearly in the Bhagavad Gita, which is generally to rejuvenate Dharma as well as to destroy all negative forces, which threaten Dharma. He also displays his divine nature before fallen/conditioned souls.

This Hindu concept states the cosmic actions of creation, maintenance as well as destruction. The first is personified byLord Brahma, considered to be the creator, the second with LordVishnu, the preserver or maintainer of the world, and the last one with LordShiva, the transformer or the destroyer. All the 3 deities combined form the ‘Great Trinity’, or the ‘Hindu Triad’. Vaishnava’s viewpoint clearly explains the greatest benefit and so you can worship Lord Vishnu.

Lord Vishnu’s name is Rig Vedic, with no specific etymology. The common interpretation is ‘apart, across’ and 0 grade of Sanu ‘ridge, summit, mountain top’, like, ‘he who spreads/steps across the mountains.

In Vishnu Sahasranama, Vishnu is regarded to be the second name of thousand names. AdiShankara has commented on Sahasranama saying that ‘Vis’ here stands for ‘present everywhere’. This means, ‘He pervades everything’ and hence, referred to as Vishnu.

Vishnu is mentioned in the Rig Veda about 93 times and frequently invoked with other deities, mainly Indra for assisting in killing Vritra and for drinking Soma. In Mandala, 2 Rig Veda hymns have been dedicated towards this lord. He is also referred to as the one who separates Earth & Heaven. Vishnu temples constructed all over the world are popularly visited by thousands of devotees throughout the year.

Is It Ok To Trim Trees In Winter?

How To Style Chelsea Boots