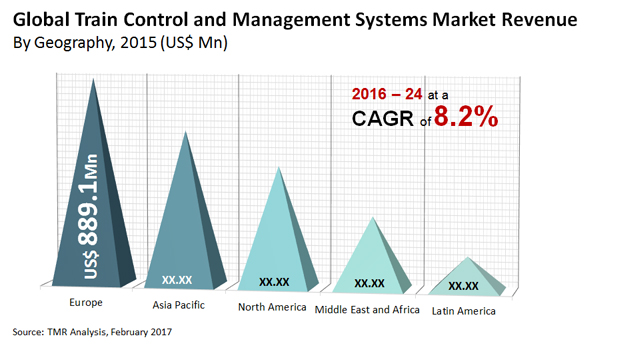 The global train control and management systems market is highly influenced by the growing demand for rapid rail transit systems across the world. The ever-rising population, worldwide, has increased the need for the up-gradation of the existing transportation infrastructure. Conforming to the need, the investments in the intercity high-speed rail lines have escalated phenomenally, resulting in the expansion of the light rail systems and subways in a number of regions, globally.

As train control and management systems help in gaining a centralized control over various subsystems of a train, their deployment is likely to accelerate substantially with the development in the railways sector over the forthcoming years. However, various risks associated with train control systems, such as failure of positive train control systems resulting in train collisions and train derailments, may create obstacles in the growth trajectory of this market in the near future.

The demand for positive train control systems is also expected to increase steadily over the next few years, owing to the rising knowledge about various safety features provided by these control units, such as line speed enforcement, collision avoidance between trains, temporary speed restrictions, and rail worker wayside safety.

Europe to Maintain its Lead Through 2024

The worldwide market for train control and management systems is spread across Europe, Latin America, Asia Pacific, the Middle East and Africa, and North America, among which, Europe has emerged as the leading regional market, thanks to the presence of established train control and management systems manufacturers. Analysts expect this regional market to remain on top over the next few years, progressing at a CAGR of 7.70% between 2016 and 2024.

North America, which surfaced second in the global market in 2015, is expected to retain its position, offering lucrative opportunities for market’s rise, in the years to come. The significant rise in the government expenditure on various high speed rail projects in this region is anticipated to boost North America market for train control and management systems. Asia Pacific is also projected to witness a considerable expansion in its train control and management system market in the near future, owing to the surge in the need for energy efficiency and the reduction in road traffic congestion. The escalating public investment in rail projects and the development of railway infrastructure is also estimated to support this regional market over the coming years.

In recent few years, there is remarkable growth in adoption of train control and management systems. One of the key factors behind growing use of these systems is their capability to run the trains with utmost efficiency together with maintaining the safety of passengers in it. Thus, growing adoption of these systems in trains is likely to generate prominent expansion avenues in the global train control and management systems market in the forthcoming years.

With increased worldwide population and urbanization, the government bodies of many countries across the globe are growing focus toward strengthening their transportation systems including trains. They are increasing initiatives to develop high-speed rail network to cater to the increasing demands for advanced transportation facilities. This factor is expected to generate promising sales opportunities in the global train control and management systems market in the years ahead.

How to choose an automatic pet feeder?

What skills are required to become a top tattoo artist?