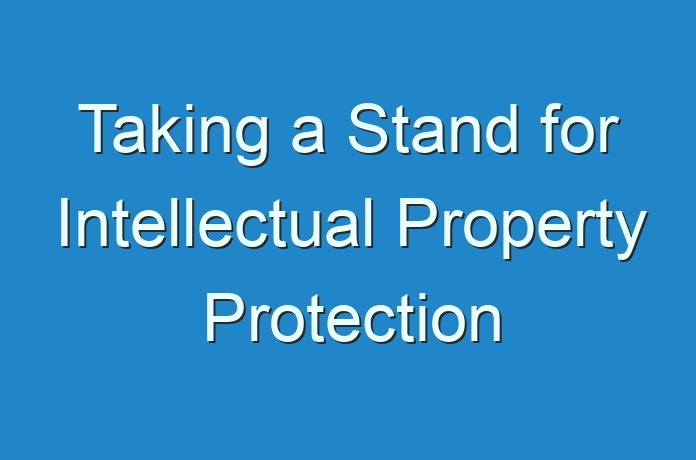 For most of human history, property crimes have been limited to physical objects — food, clothing, money, jewelry, and etc., while intangible items like art, music, literature, and inventions were accorded secondary importance, and received much less legal protection as a result. This norm began to change after World War II, as it became clear that the Western World was gradually evolving from Industrial Age into what could best be described as Information Age. Intellectual property, from patents for inventions to pure information, were becoming increasingly common, and this trend has only accelerated in the decades since. Indeed, some modern businesses have little, if any, physical property to protect. Their success depends on proprietary software, copyrighted literature or songs, specific logos or images, or the ability to store and manage proprietary data. In such instances, trademark protection of these items becomes of utmost importance.

However, increased freedom of information, in combination with the development of more efficient (e.g., electronic) methods of disseminating this information, has threatened the ability of intellectual property owners to retain and profit from their properties. It is becoming clear that intellectual property must be protected at least as vigorously as physical property because ideas can be just as profitable as any tangible item. Failure on the part of civil society to recognize the rights of intellectual ownership can result in frustration and economic hardship on the part of individuals who produce intellectual properties, engendering a sort of creative apathy, which may ultimately result in cultural stagnation.

Intellectual property is defined as a product derived from intellectual, creative processes, and may include any of the following:

In an age where most people have access to Internet, defending intellectual property becomes especially significant. It is a simple matter for anyone to steal and pass off as one’s own the creative inventions of others, and intellectual properties like computer files and software are much easier to copy than physical properties.

Vigilance and immediate retaliation against theft are imperative. The rights of the intellectual property owner must be recognized as more important than that of the casual infringer. If creativity is to survive, the laissez-faire attitudes of most legal systems toward intellectual property theft must be overcome. The requisite laws and mechanisms of protecting creative rights must become ingrained in the sociolegal milieu, so that the legal remedies are clear and easily applied.

At the moment, the most efficient way to legally protect intellectual property is to copyright, trademark, or patent it. Each of these forms of protection presupposes that all legal systems will recognize this protection, which is not necessarily the case, even if it is intended to be worldwide. While the property’s owner is provided with a certain level of legal recourse if their property is stolen, it’s not always possible to take advantage of the prescribed remedy.

Just about any item can be the target of intellectual property theft, particularly if branded or trademarked: designer clothing and electronics are great examples of it. In these cases, the counterfeiter is trading on the name and good reputation of the popular brand so they can sell their products, behavior that hurts both the pirated company and the consumer.

Plagiarism, the act of appropriating someone else’s composition, is probably the most common form of intellectual property theft. Though the term most often applies to written works, music is occasionally plagiarized too, either intentionally or otherwise. Even musical legends have faced accusations of cribbing songs from others. The melody of George Harrison’s paean to Hare Krishna, “My Sweet Lord,” was copied from the Chiffons’ “He’s So Fine”, and the courts ordered him to give up any royalties earned from the song.

Scientific discoveries also require legal protection, although in extreme cases, even that may not be enough: consider the infamous Rosenberg case, in which Ethel and Julius Rosenberg gave the Soviet Union scientific data that helped the Russians develop the hydrogen bomb. Most claims of scientific infringement, however, are much less dramatic, are predicated on commercial rather than ideological reasons, and can be settled in U.S. courts. One example is the mid-2000s case by Eolas Technology against Microsoft for infringing on web-browser patents held by Eolas. Much to Microsoft’s displeasure, Eolas won the case.

Communications patents are often infringed upon as well, and this was brought home emphatically in the case that almost shut down the Blackberry Personal Digital Assistant (PDA) wireless network. A firm called NTP brought suit against the Blackberry’s inventor, Research in Motion, for violating two of its patents, and the case went all the way to the Supreme Court. Ultimately the Supreme Court sent the suit back down to the lower courts to be settled. RIM has since faded into digital history, as smartphones have taken up the role of PDAs.

The examples offered here represent just a few of the ways intellectual properties may be stolen and abused; sadly, the same sort of inventiveness that results in the creation of these properties is often used to subvert them. Manufacturing will always be an essential part of Western culture, but as we make our way deeper into the Information Age, proprietary information, processes, ideas, inventions, literature, and other purely intellectual properties will become increasingly valuable. That being the case, the legal struggle to stem the tide of intellectual property theft must become more serious and forceful. The options are simple: we can weave a web of protective laws that apply everywhere our legal appendages can reach to protect the results of intellectual work or creativity withers on the vine. In addition to that, is always a smart choice to consult with professionals in the field, such as copyright lawyers, who can provide a valuable advice on how to best protect your intellectual property.

Transform your brow with Eyebrow makeup

Wireless Earphone Market 2022 Expanding at a CAGR of 8.2%