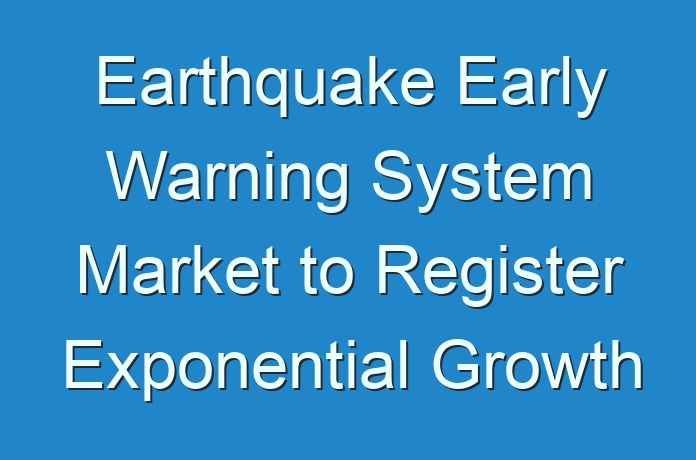 Request a sample to get extensive insights into the Earthquake Early Warning System Market https://www.transparencymarketresearch.com/sample/sample.php?flag=S&rep_id=72853

Due to the presence of a number of top tier market players, advancements in technology, focus on research, and considerable investments, the earthquake early warning system market in the developed regions, including North America and Europe is expected to exhibit faster growth rate in comparison with that in the Asia Pacific region. Over the past few decades, several pockets of Europe have experienced multiple low impact to moderate earthquakes that have led to considerable losses. This factor has prompted governments of several nations in Europe to focus on the development and deployment of earthquake early warning systems. Although Europe was at the forefront in terms of deployment of seismic networks and stations for several decades, the deployment of high quality and cutting-edge seismic networks has shifted gears in the last few years, as a number of market players are increasingly focusing on making algorithmic improvements and improving the efficiency of their earthquake early warning systems.

While the European region is projected to provide fertile grounds of growth to a number of players involved in the current earthquake early warning system market, the North American region is expected to provide abundant opportunities. A number of companies, along with the support from the state as well as the federal government are focusing on innovations and leveraging new technologies to improve the quality of the existing earthquake early warning systems. For instance, in October 2019, the state of California announced the launch of a newly developed first-of-its-kind earthquake early warning system that will be linked to a smartphone application and send out traditional alerts as well as warning delivery methods, including wireless emergency alerts (WEA).

The newly developed earthquake early warning system designed by a team of seismologists & engineers from Berkeley and University of California will alert communities in case the magnitude of the earthquake exceeds 4.5 through the app– a model that has made considerable inroads in nations including Mexico and Japan.

The onset of the novel COVID-19 pandemic is expected to hinder the growth of the global earthquake early warning system market in 2022, as governments around the world are primarily expected to focus on the discovery of a vaccine for the novel COVID-19 disease. While the development across the research and development front is projected to remain steady, the deployment of new concepts and technologies could slow down in 2022 in several parts of the world due to the ongoing pandemic. The market is anticipated to show signs of recovery toward the last quarter of 2022, as governments around the world are gradually lifting stringent lockdown restrictions and other stringent barriers that were imposed to curb the transmission of the virus.

Stuck in a neck-to-neck competition with other brands? Request a custom report on Earthquake Early Warning System Market https://www.transparencymarketresearch.com/sample/sample.php?flag=CR&rep_id=72853