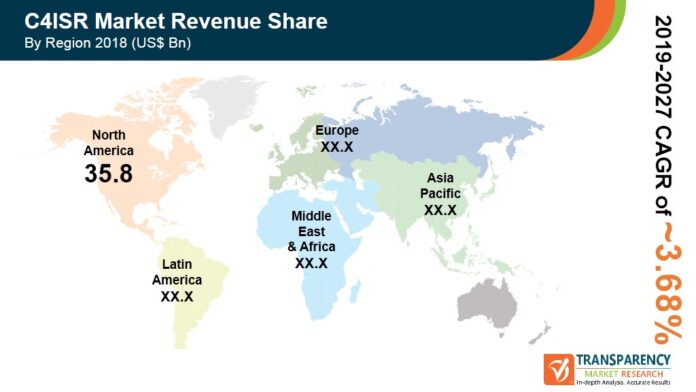 Command, control, communications, computers, intelligence, surveillance and reconnaissance (C4ISR) is the broad classification of the military’s efforts to advance its information processes and systems for using information during war. Increasing demand for electronic warfare across military & defense has led to adoption of C4ISR globally. C4ISR has now become a vital part in military strategy and structure. Rise in situational awareness to help the military in times of war is expected to be one of the major factors driving the global C4ISR market during the forecast period 2019 – 2027. The C4ISR market is forecast to quickly grow to US$ 135.80 Bn by 2027, recording a CAGR of 3.68% over the forecast period.

Increase in the demand for next generation IP systems is expected to be one of the major factors boosting the demand for C4ISR during the forecast period 2019 – 2027. In addition, next generation IP systems are best used for communications in different applications such as combat vehicle crew, main battle tanks (MBT), and armored personal carriers (APC) among others. Increasing demand for C4ISR systems across various platforms such as airborne, land, and naval is predicted to boost its demand.

The control, command, computers, communication, intelligence, surveillance, and reconnaissance (C4ISR) market has been segmented on the basis of platform into airborne, land, and naval. In 2018, the airborne segment was the major market followed by land and naval and is anticipated to continue during the forecast period 2019 – 2027. The major factor fueling the growth of the airborne market is frequent terror attacks in several major countries such as India and France. In addition, border protection and surveillance is expected to be the other factors boosting the growth of the C4ISR market during the forecast period 2019 – 2027.Increasing adoption of C4ISR systems in naval applications such as naval tactical command support systems, marine navigation systems, and others, is also predicted to accelerate the demand for C4ISR in the near future.

Surveillance and reconnaissance, computer, tactical communication, electronic warfare, command and control, and others are the various component types of the C4ISR market. The others sector includes deployment of various intelligence systems. Surveillance & reconnaissance segment is expected to dominate followed by command & control and tactical communication and is anticipated to remain the same during the forecast period 2019 – 2027. Increased cross-border tensions and warfare & fights between countries are boosting the demand for electronic warfare. These attacks around the world are likely to drive the market for C4ISR during the forecast period. The role of reconnaissance and surveillance has become crucial to military due to the need to counter increasingly stealthy threats more efficiently and within a timeline. However, in the coming years, government funding for modernization of electronic warfare is expected to further boost the global C4ISR market.

The global C4ISR market is fragmented in nature with large number of companies operating in the market. Leading players are currently focusing on providing technologically enhanced products to the customers. Moreover, as part of this strategy, companies are engaging in various strategic partnerships and acquisitions, focusing on expanding their business through new service additions and geographical presence.