Home News What is the scope and future of the Global Wi-Fi 6 Devices... 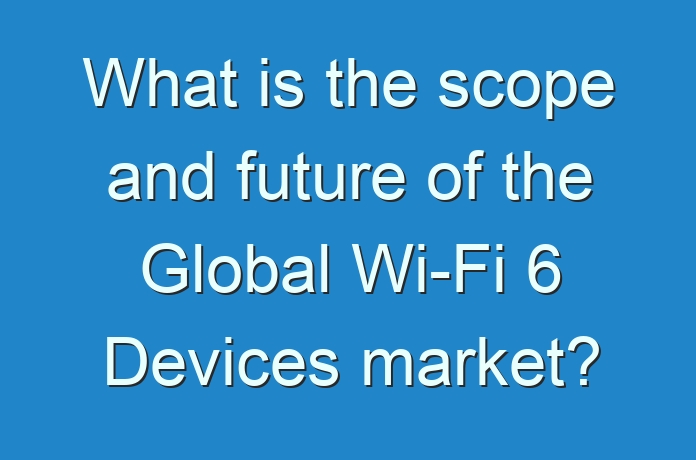 Increased adoption of smart devices and demand for fast Internet services from various end users is driving the market. Internet speeds with this latest standard of Wi-Fi are projected to increase by 40% compared to its previous generation. The implementation of the Orthogonal Frequency Division Multiple Access, which has the ability to classify one wireless channel into several sub-channels and each of these sub-channels have the ability to carry data for different devices will boost the enterprise as well as residential demand for Wi-Fi 6 devices. The report analyzes the global Wi-Fi 6 devices market and provides estimates in terms of revenue (US$ Mn) from 2018 to 2030.

Planning to lay down future strategy? Perfect your plan with our report sample here https://www.transparencymarketresearch.com/sample/sample.php?flag=S&rep_id=72180

Rise in Internet Usage and Adoption of Smart Devices: Increased penetration of smartphones has exponentially boosted Internet usage within the residential segment across the globe. According to a report published by the GSM Association, the total number of mobile users accounted for almost 67% of the global population at the end of 2019. The GSM Association also stated that the number of mobile phone users in the world would increase from 5.2 billion to 5.8 billion from the end of 2019 to 2025, of which, 65% were smartphone users in 2019 and it is estimated that the share would reach 80% by the end of 2025. More than 450 million Wi-Fi hotspots were in deployment across the globe, and the installed base was more than 13 billion Wi-Fi devices by the end of 2020.

Increasing Investments in Public Wi-Fi: Rising usage of smart devices and other Internet-enabled systems across the globe is driving the demand for Wi-Fi hotspots. This is projected to boost the number of public Wi-Fi hotspots over the next few years. The manufacturing of smartphones at a large commercial level was started in year 2019, and it is estimated that smartphone manufacturers are presently considering integration of Wi-Fi 6 chipset in new smartphones development. In August 2019, Qualcomm announced the latest generation of its Wi-Fi 6 chipsets intended for routers, access points, and smartphones. It is estimated that to manage the requirements of high network density (majorly due to increasing number of smart devices), Wi-Fi 6 would have a critical role for mobile broadband end users and newer applications such as the Internet of Things and smart cities. Rise in infrastructure investment from companies such as Intel Corporation, Qualcomm, and Broadcom for Wi-Fi 6 chipsets and increase in development of Wi-Fi 6 enabled smart devices are driving the market.

In terms of region, the global Wi-Fi 6 devices market has been segmented into North America, Europe, Asia Pacific, Middle East & Africa, and South America. Asia Pacific held a significant share of the Wi-Fi 6 devices market in 2019, and this trend is expected to continue during the forecast period. Within Asia Pacific, China and India are anticipated to drive the growth of the market. This is due to the strong adoption levels of smart devices and Internet services in the region, and high focus on operational cost optimization. All the regions have the most competitive and rapidly changing markets in the world for improving the strategy of Wi-Fi 6 devices and their adoption in organizations.