Knnit
Home Business Small Hydropower Market is expected to rise 2.5% CAGR from 2022 to... 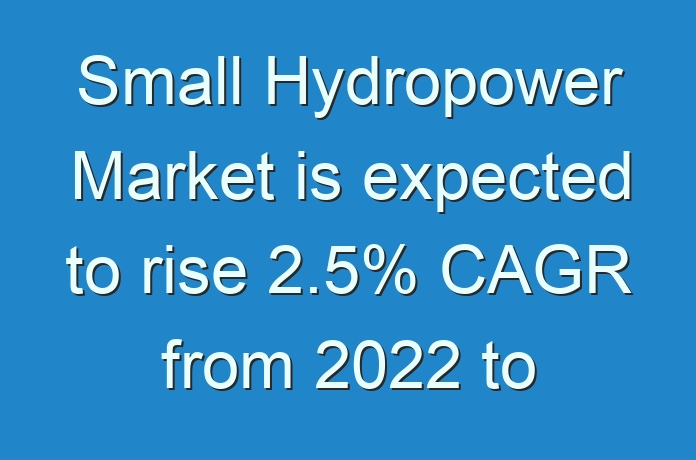 The consumption of electricity has been increasing significantly across the globe for the last few years due to rapid industrialization & urbanization and strong economic growth. The increase in demand for electricity and stringent norms & government regulations to minimize carbon emissions from the power sector are compelling companies to introduce highly effective and pollution-free energy generation methods. Small hydropower is a prominent alternative to fossil fuel, as these plants utilize moving water for power generation. Small hydropower is primarily employed in isolated regions. Small hydropower is a suitable option to generate sustainable as well as inexpensive energy in developing and rural areas due to its low investment costs, versatility, and renewable nature. Thus, increase in harnessing of hydropower resources across the globe is expected to drive the global small hydropower market during the forecast period.

In December 2018, Voith won an order to design, manufacture, supply, and commission two StreamDivers for the small hydropower plant Gradiste in Macedonia, Europe. The company is also expected to supply gate valves and supervise installation. The power plant is likely to become operational in 2022.

The small hydropower market in Europe is estimated to expand during the forecast period, owing to the introduction of several incentives to promote the adoption of renewable technologies. For instance, in December 2019, the European Commission and a consortium of 19 partners launched the four-year XFLEX HYDRO (Hydropower Extending Power System Flexibility) project at the ongoing United Nations (UN) Climate Change Conference (COP25) in Madrid, Spain. Turkey accounted for a major share of the small hydropower market in the region in 2019. Turkey held hydropower capacity potential of 6,500 MW in 2019.