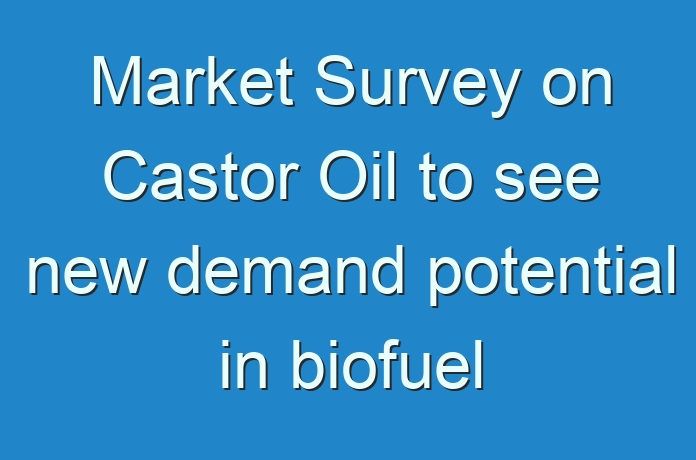 End-use industries such as cosmetics and pharmaceutical have been benefitting from moisturizing, anti-fungal, and anti-inflammatory properties of castor oil. The castor oil market is prospering on the back of the large purported medicinal value of the oil that drives in demand in wide range of medicinal use, notes Transparency Market Research (TMR).

The competitive ecosystem in the castor oil market has been witnessing key players adopting a range of strategies to consolidate their shares or position. Numerous players have been cavorting to ensure a steady supply of raw materials, which also imparts a competitive edge over other rivals. To this end, they are inking deals and long-term partnerships with castor seed producers in various parts of the world. Several of the top players in the castor oil market are also focusing on measures and strategic moves that will ensure consistent availability of raw materials to keep the prices steady for end consumers.

A robust and steady momentum to the growth of the castor oil market comes from its utilization in wide range of cosmetic products and formulations. In fact, the prospects is so vast that the cosmetic segment is expected to chart a CAGR of 4.5% during 2018 – 2026. The rising use of castor oil in skin care products, including facial skin care, around the world has been boosting the market. The popularity stems from the fact that castor oil possess a unique mix of antimicrobial and anti-inflammatory properties. Brands promote the potential of castor oil in reducing acne symptoms, thus reinforcing its demands in the castor oil market.

Further, various cosmetic and pharmaceutical are gathering steam among consumers on the back of growing body of animal-base studies that have demonstrated the effectiveness of castor oil in range of applications.

The growing popularity of hydrogenated castor oil among consumers in emerging economies has been bolstering the expansion of the castor oil market. Moreover, the proliferation of manufacturing facilities and research centers in these economies has helped broaden the prospects. Of all the regions, Asia Pacific is expected to hold a dominating share in the global castor oil market throughout the forecast period. The regional market is expected to make large strides due to the fact that a few countries in the region account for sizable volumes of seed production, globally. On the other hand, Latin America is witness a promising potential in the global castor oil market. Top players in the coming few years down the line may set their focus on this regional market.