Home News Does a dedicated server need a RAID ARRAY? 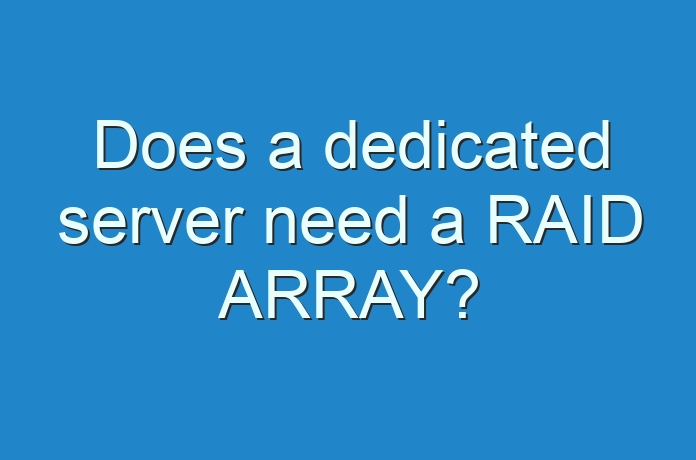 First, let’s figure out what RAID is and why it is needed in server colocation. RAID is a set of disks combined, and visible to the OS as a whole. RAID is ubiquitous in servers and is needed to increase the resiliency and performance of the disk subsystem. To make the right choice, consider the most common types of RAID-arrays – 0, 1, 10, 5, 50. Each of the types has its advantages and disadvantages and is also used for different tasks in colocation uk.

RAID 0 is the fastest and least fault-tolerant RAID level. Data is written in blocks simultaneously to all disks of the array.

Thus, the larger the disks, the greater the read / write speed, however, the risk of data loss also increases, since if any of the disks fails, you will lose all information.

Conclusion: RAID 0 can be recommended for non-critical and budgetary tasks that require you to have an up-to-date backup, and time to restore data.

RAID 1 is the simplest kind of array. Data is duplicated on all drives. The more disks, the higher the fault tolerance. In terms of speed, there is often no difference between one drive and an array of drives.

Conclusion: it is recommended to use, if necessary, to ensure the safety of data, two identical disks in the array are sufficient.

Conclusion: Faster and more resilient than RAID 1 and RAID 0, however, it requires more redundancy than RAID 5 and RAID 50.

RAID 5 is the most common type of array. It requires three or more disks. It can use the capacity of all drives except one. That is, when using three disks, you get the volume of two. If one drive fails, data is not lost, but it is urgent to replace a failed drive, or initially install an additional drive as a backup. The most economical view of fault-tolerant RAID arrays.

Conclusion: it can be used for a wide range of tasks, it is economical, and performance increases with the number of disks.

RAID 50 — Represents two (or more) RAID 5 that alternate. The minimum required number of disks is six, and the capacity of two disks is lost. More productive than RAID 5, fault tolerance can be the same, or when you exit one drive from each RAID 5 array, RAID 50 can continue to work.

We figured out the main RAID levels in best dedicated server hosting uk, now we will discuss what to look for when ordering a server with the ability to build RAID arrays.

The “heart” of a RAID array is the controller. The controller can be built-in or installed optionally (external). Often, a hosting provider provides a built-in controller for free. But it should be borne in mind that it is advisable to use it only in some cases, since it has several minuses, among which are processor resources, lower performance, reliability, and bandwidth, especially in RAID 5 and RAID 50. It is most optimal to use the built-in controller when building RAID 0 and RAID 1, in lightly loaded systems.

If you have a busy disk subsystem, it is highly recommended that you use an additional controller. Colocation Hosting providers usually offer a choice of several different controllers, which may vary in performance, some mapped drives, cache size, and support for RAID levels. Typically, external controllers support all common RAID levels. The amount of cache memory directly affects the speed of writing to disks, and if you have a busy site, but the larger the cache, the better, it is also recommended that you order a battery for the controller if possible, if you use a DBMS.

A separate point is to consider software RAID, which can be created without using any controllers. This option is the least preferred, all the load falls on the processor, and if you need reliability and performance, then it is not recommended to use it, the scope is the same as RAID-based on the built-in controller.

If we talk about the cost of such an option as RAID, when choosing a server, it is worth noting that the prices for installing an external RAID start from 1000 rubles per month, for simple models, up to 2000 rubles for more serious controllers. Which controller to choose depends on your requirements for the speed of the disk subsystem like those use by best email hosting, and the number of disks in the array? As already mentioned, if you just need to add fault tolerance to the server, and you worry about data safety, and at the same time the load on the disk subsystem is low, then it is quite possible to use the built-in RAID controller or software.

Also, if the question is the speed of the disk subsystem, then we can consider a modern alternative – SSD-drives. They have a significantly higher read/write speed, as well as a high data access speed. However, they have a serious drawback – high cost, with a small amount, and unfortunately without the use of RAID, they will only help to win in speed and by themselves, they will not help to increase fault tolerance.

To summarize: if you choose a server for highly loaded sites where fault tolerance is critical, then you can not do without RAID 5, or RAID 50, and the more disks you install, the faster the array will be. If fault tolerance is not critical and you need enough SSD disk space, then the best choice is SSD, if you run out of space, you can use 2 or more regular disks in RAID 0. If you just need to increase fault tolerance, then depending on the load on the disk subsystem, you can use RAID 1 or RAID 5, either on the built-in or software RAID or with an external RAID controller.

What are the Future Growth Prospects for Household Sewing Machines Market? | Detailed Insights...