Home News Cool Roof Coatings Market is anticipated to expand at a CAGR of...

The global cool roof coatings market was valued at US$ 294.06 Mn in 2017 and is anticipated to expand at a CAGR of 7.10% from 2018 to 2026, according to a new report titled ‘Cool Roof Coatings Market: Global Industry Analysis, Size, Share, Growth, Trends, and Forecast, 2018–2026,’ published by Transparency Market Research (TMR) The global market is driven by the rise in demand for cool roof coatings in industrial applications such as workshops, warehouses, malls, and IT parks. In terms of production and consumption, North America held significant share of the global cool roof coatings market in 2017. 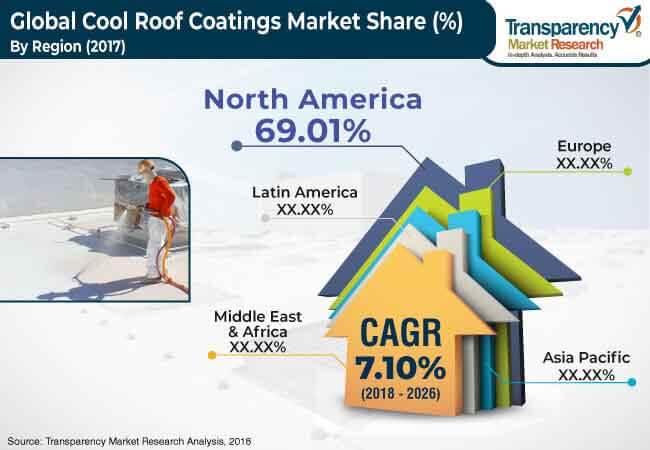 Demand for energy-saving building materials is high across the globe. These materials are used for renovating commercial buildings and new homes. Cool roof coatings provide safe and improved structures and assist in saving energy costs. These roof coatings have high adoption rate as they promote environmental and economic sustainability. Cool roof coating is an attractive market that is gaining momentum in the roofing industry.

Cool metal roofs help reduce annual energy costs by 40%. Pre-painted or granular-coated metal roofing systems are preferred for homes in warmer climates, as these reflect solar energy and re-emit most of the absorbed solar radiation. Highly reflective and emissive painted or granular-coated metal roofs are used to lower energy consumption. They can re-emit up to 90% of absorbed solar radiation. Cool roofs also enhance durability of roofs, lower building cooling loads, and reduce the urban heat island effect. Cool roof coatings transfer less heat to the building, thereby maintaining the temperature of the building and consuming less energy for air conditioning. Cool roof coatings assist in decreasing the production of associated air pollution and greenhouse gas emissions by reducing the use of energy. Cool roofs maintain the air temperature inside a building with or without air conditioning.

Cool roof coating is a green technology. However, it is not a new concept. In the 1980s, a research was conducted by the Departments of Energy in California and Tennessee to analyze ‘solar radiation control coatings’ on rooftops. It was found that energy costs decreased when these coatings were used. Cool roof coating technologies emerged in 2001 in California in the U.S. Rolling blackouts were occurring frequently due to high demand for energy and insufficient power supply. Cool roof coating techniques were installed to lower the demand for energy and reduce electricity costs, while avoiding future blackouts in the area.

Cool roof coating is an emerging technology used for temperature control of buildings. These coatings prevent heat absorption by reflecting the sun’s heat and emitting its radiation back into the atmosphere. Thus, these coatings provide comfortable and controlled indoor environment. Less awareness among customers about cool roof coatings is hindering the market. However, new projects have been started by governments to promote the use of cool roof coatings. For instance, in 2017 and 2018, cities such as Ahmedabad and Hyderabad in India initiated pilot cool roof programs. These initial programs included awareness campaigns, pilot initiatives targeting 3,000 roofs, and application of cool roof techniques in government buildings and schools.

Based on type, the global cool roof coatings market has been bifurcated into elastomeric and IR reflective. Elastomeric coatings are widely used in industrial applications. These coatings provide numerous advantages over IR reflective coatings. They absorb less heat during daytime, saving on annual cooling costs and reducing the carbon footprint of buildings.

The IR reflective segment is expected to expand at a moderate pace during the forecast period. IR reflective coatings are being adopted extensively due to their affordability and simpler nature than elastomeric coatings. They are generally employed in residential applications.

The competition in the cool roof coatings market is high in the U.S. due to the presence of large numbers of players producing cool roof coatings in the country. Key players operating in the market include DowDuPont, Akzo Nobel N.V., Nutech Paint, The Valspar Corporation, BASF SE, and Huntsman International LLC.