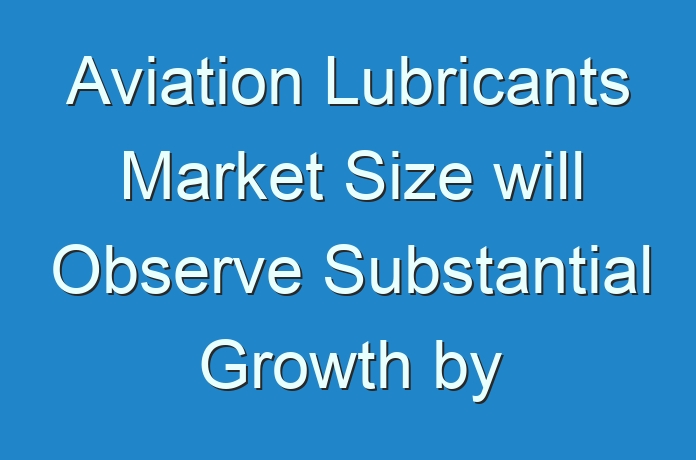 The push for environmentally-friendly products used across industries has gained traction in recent years, the influence of which has reached the aviation lubricants market as well. As a way of reducing the negative impact of aviation lubricants on the environment, manufacturers and end users are increasingly looking at biodegradable alternatives to available aviation lubricants. Bio-based oils, which are quickly attaining popularity, are derived from plant based, renewable sources, and generally consist of vegetable oil. This has caused considerable activity in the landscape, with companies focusing R&D investments toward innovating products that are non-hazardous products, biodegradable, and bio-based.

Riding this wave of popularity, in 2018, the bio based lubricants segment in the global aviation lubricants market accounted for ~13% of the global market share, with sales amounting to ~12 thousand tons. It is expected to grow over the forecast period, to hit the ~20 thousand ton mark by the end of 2027. 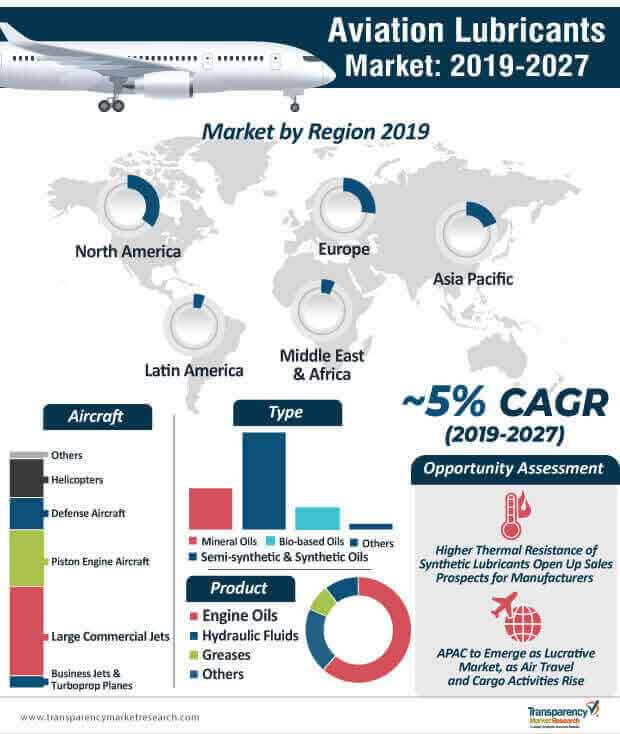 Conventional lubricants that are used by end users of the aviation lubricants market are usually either mineral or synthetic lubricants, categorised based on how they are produced. Mineral oil-based lubricants are generally derived from refining crude oil to remove the hydrocarbons present. This is generally a low-cost option and because they move slowly through the engine, and, as such, remains a less popular option of aviation lubricants when compared to synthetic alternatives.

Synthetic and semi-synthetic lubricants, which held the largest share, accounting for over half of the global market, are expected to remain popular in the years to come. Containing fewer impurities than mineral oil, and being chemically modified, they are more efficient than their mineral counterparts, contributing to their popularity. This segment, which was valued at ~US$ 550 Mn in 2018, is expected to grow steadily and hit the ~US$ 900 Mn mark by the end of 2027. However, the mineral oil segment is also likely to steadily expand, progressing at a CAGR of ~5% by revenue share during the course of the forecast years.

A side-by-side comparison of conventional mineral oil-based lubricants versus semi-and synthetic oil lubricants demonstrates the superiority of synthetic oil on several fronts, including efficiency, biodegradability, and thermal and oxidative stability, which is set to shape the further evolution of the market.

Stability of Airline Industry to Positively Contribute to Market Growth

Rise in air travel and cargo activities, globally, is one of the biggest factors contributing to the growth of the airline industry, and subsequently the aviation lubricants market. Stakeholders in the global aircraft landscape are increasingly taking advantage of this trend, as they strengthen their commercial fleets in developing countries around the world. This particularly applies to growing markets around the world, where the increase in air traffic is likely to augment the growth of the global aviation lubricants market in the foreseeable future.

North America held the most significant share of the global aviation lubricants market, accounting for around one-third of the total market share, volume-wise, in 2018. It is expected to expand steadily at a CAGR ~5% by volume over the forecast period, while continuing to remain the largest regional market in the global landscape. This can be attributed to the existing military fleet that is being gradually upgraded, which has an indirect impact on the growth of the market in this region. The presence of a number of manufacturers and key players in the aviation lubricants market in North America is also understood to have a positive influence on the expansion of the market in the region.

However, expanding the fastest at a value CAGR of ~6% is Asia Pacific, which was valued at ~US$ 195 Mn in 2018, and is expected to expand 1.5X, to reach the ~US$ 335 Mn mark by the end of the forecast period of 2027. Rising air traffic and cargo activities can be credited to the growth of this regional market, as it is opening up a plethora of opportunities for stakeholders in the aviation lubricants market.

Renting from car rental agencies? Read these tips before you start booking!

Viaplay A Live Streaming Website – Why It Is Considered To Be The Best...

Why people are moving to online betting?