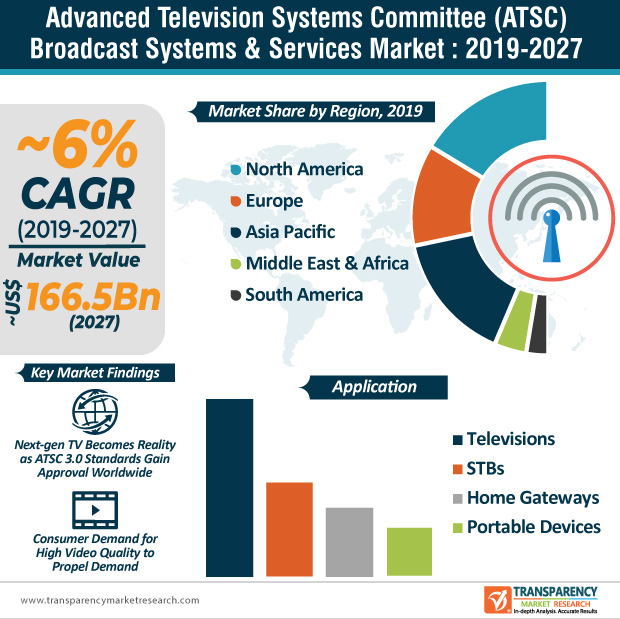 Technological advancements have played a key role in overturning the fortunes of a range of industries. A similar trend can be observed in the broadcast industry wherein progress on the technological front will bring about innovation. Since the inception of the Advanced Television Systems Committee (ATSC) in the 1990s, the broadcasting standards set by the ATSC have gradually gained worldwide acceptance. Within the Advanced Television Systems Committee (ATSC) broadcast systems & services market, the adoption of Next Gen TV is growing at a rapid pace, as new ATSC standards including the ATSC 3.0 are being implemented worldwide. The fast-paced implementation of ATSC 3.0 is driven by the shortcomings of the outdated ATSC 1.0. Moreover, the advent of ATSC 3.0 is expected to play an integral role in the expansion of the ATSC broadcast systems & services market during the forecast period (2019-2027).

Additionally, ATSC 3.0 is also the first-ever Internet Protocol (IP)-based television standard. The significant progress in technology coupled with ATSC 3.0 is expected to offer Ultra HD 4K TV, refresh rates of around 120 Hz, and improved TV reception. While consumer appetite for high-quality content continues to grow, technological advancements in the broadcast industry will remain pivotal to fulfill this demand. Due to these factors, the ATSC broadcast systems & services market is expected to reach a market value of ~US$ 112 Mn by the end of 2020.

While ATSC 1.0 brought about the first wave of revolution in the broadcast sector, the recently curated ATSC 3.0 standards is set to revolutionize TV broadcasting during the assessment period. Stakeholders operating in the ATSC broadcast systems & services market are of the opinion that the new IP-based standards will play a key role in improving conventional television and data services. The ATSC 3.0 was formulated by the Advanced Television Systems Committee and is growing in popularity across developed countries of North America and Asia Pacific such as the U.S. and South Korea. ATSC 3.0 is likely to provide an avenue for digital terrestrial television standards such as Japanese/Brazilian ISDB-T, European DVB-T, and other Chinese DTMB platforms.

Moreover, as nations are approving the new IP-based standards across the world, Next Gen transmission is expected to soon become a reality. ATSC 3.0 is expected to offer consumers a range of advanced services and create significant growth opportunities for stakeholders in the ATSC broadcast system & services market. In addition, there is a strong possibility of integration of broadband and broadcast services, which will pave the way for ATSC 3.0 to penetrate the 5G transmission space for non-TV transmission. The new standards are aimed toward providing improved broadcasting services with improved quality of audio and video. Furthermore, as the implementation of the new standards is currently in its nascent stage, there is tremendous scope for participants in the ATSC broadcast systems & services market to increase their stakes in the current market landscape.

As the digital world continues to take giant strides toward IP-based standards or ATSC 3.0, corporates are closely monitoring these developments to identify the possibilities of new branding and marketing strategies. Brands and product messaging strategies largely revolve around the flow of the content in which digital marketing and television marketing play a critical role. Within the next few years, 5G technology and ATSC 3.0 is expected to emerge as a strong competitor to the over-the-air (OTA) broadcast framework. The targeted ads and branded content delivery models are set to witness a major overhaul over the next few years, as ATSC 3.0 will enable broadcast stations to monitor the content that is being watched and display ads accordingly. Targeted ads and branding are anticipated to undergo a noteworthy transition in the coming years, as ATSC broadcast systems and services continue to gain popularity.