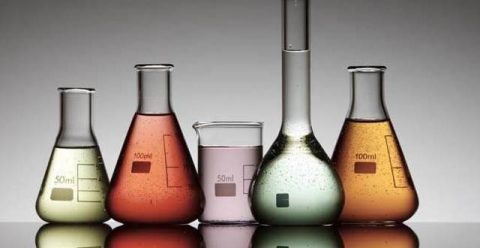 Adipic acid, also called as hexanedioic acid, is a white crystalline solid that melts at 152°C. It is one of the most important monomers used in the polymer industry. Adipic acid is an organic acid that contains six carbon atoms. It also has two carboxylate groups (–COOH) attached to the terminal carbons in the chain. Since adipic acid contains two carboxylate groups, it is sometimes referred to as a di-acid. All other carbon atoms in adipic acid contain two hydrogen atoms each. These carbon atoms are called saturated carbons, as they contain the maximum number of hydrogen atoms. The most commercial method for formation of adipic acid is oxidation of cyclohexane, which gives cyclohexanone (K) and cyclohexanol (A), called KA oil. This oil further reacts with nitric acid in the presence of a catalyst to produce adipic acid.

It is employed in polymer additives for epoxy curing agents and plasticizers. Adipic Acid is also utilized as a chemical intermediate in the synthesis of polyesters/diesters, polyester polyols, adiponitrile, cyclopentanone, 1, 6-hexanediol, and dimethyl sebacate. Other applications include solvents, lubricants, soil conditioners, glass protection agents, briquetting agents, leather tanning agents, flue gas desulfurization scrubbers, and cleaning aids. Adipic acid is applied in the pharmaceutical industry. Adipic acid is incorporated into drug tablets in order to help with the controlled release of both acidic and basic drug compounds. Adipic acid is used in the food industry as a flavoring aid as well as gelling aid. Adipic acid is used in antacid tablets to impart tart flavor.