Home Sports What Will The Two Ryder Cup Teams Look Like In 2022? 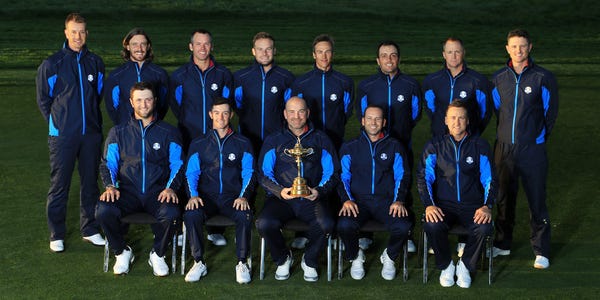 The Ryder Cup is a biannual team competition which takes place in golf between the United States and Europe. The latest edition of the tournament is set for September 2022 at Whistling Straits, Wisconsin.

Here is a look at how the two teams may line up for the 43rd edition of the prestigious golf match.

United States are the favorites at -150 in the golf betting for the 2022 Ryder Cup and it is easy to see why as their team looks set to be very strong this year.

Captained by 2008 Ryder Cup winner Steve Stricker, USA will have home advantage so the course should be set up to suit their squad of players.

Stricker will then have four picks to make as the captain. If they don’t gain automation qualification, the USA leader will most likely consider Tony Finau, Matt Kuchar, Rickie Fowler, Jordan Spieth, Bubba Watson and Phil Mickelson – players who have a lot of Ryder Cup experience.

The United States are bidding to win back the Ryder Cup for the first time in four years as they were defeated by Europe 17½ – 10½ in Paris in 2018.

Europe will select their 12 squad members in a different way to the United States. The top four players on the Race to Dubai points list automatically qualify, the leading five players on the world points list are then selected, while Europe’s 2022 Ryder Cup captain Padraig Harrington has three picks.

Tommy Fleetwood, Jon Rahm, Rory McIlroy and Victor Perez currently fill the first four places in the Race to Dubai standings. Tyrrell Hatton, Danny Willett, Matthew Fitzpatrick, Lee Westwood and Bernd Wiesberger would then gain a spot in the team due to the points they accumulated on the world list.

Harrington, who represented Europe in six different Ryder Cups as a player, will then have a tough decision to make on just three picks. The likes of Graeme McDowell, Justin Rose, Henrik Stenson, Shane Lowry, Sergio Garcia and Rafael Cabrera Bello will all be strongly considered.

Day one of this year’s Ryder Cup is scheduled to feature four foursomes and four fourball matches. Players take alternate shots in foursomes, while in fourball matches, each player will have a ball and the best score from that hole is recorded.

On day two of the tournament, there are four more foursomes and fourballs. The Saturday is considered vital in the Ryder Cup as it determines who has the advantage going into the final day of the competition.

As always on day three, all 12 players in each team participate in the singles matches. The captains order their players 1-12 and matchups are then paired from their positions on the list.

14½ points are required to win the cup so that is the magic number both sides will be chasing to reach in September in the latest renewal of this golf event.

Alternative Fuel-Powered Military Fleet Market : Repository of Analysis and Information for Every Facet...

Underground Mining Diamond Drilling Market to Reach US$ 685.1 Mn by 2026