The global vital wheat gluten market will rise from ~US$ 2 Bn in 2019 to ~US$ 2.7 Bn by 2027, as market players mark the rising proclivity of consumers for protein-fortified products. Consumer sentiments oriented towards vegan food will give impetus to the vital wheat gluten market, as plant-based protein is the sole source of protein for the vegan populace.

With health being at the center of innovation, vital wheat gluten has already carved a niche of its own in the bakery industry. Further, the nutraceutical industry is also highly likely to catalyze the revenue of the market, as consumers are seeking nutrition outside their plates. However, an interesting aspect of vital wheat gluten is its penetration in the pet food and animal feed segment. Though currently at a budding stage, this trend is likely to grow in terms of popularity, owing to the rich protein content of vital wheat gluten that is essential for the overall well-being of pets and cattle.

Vital wheat gluten is also gaining a place of prominence in the diets of bodybuilders and athletes who suffer from celiac disease or gastric and bloating problems. With sustained demand for vital wheat gluten ascending from numerous end users, manufacturers are evincing interest in manufacturing clean-label and organic products to improve their sales prospects. 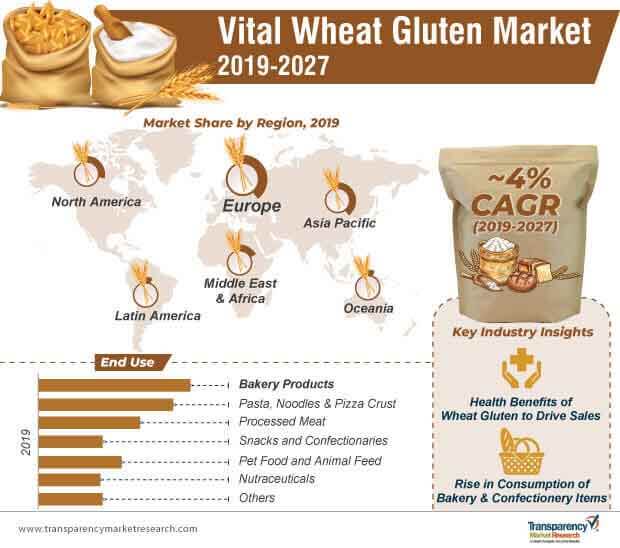 Popularity of Entomophagy Culture – A Divergence to Steady Market Growth

There has been heated debates across the world regarding the risks associated with cultivating and consuming genetically modified foods. Owing to such disparities, regulations regarding testing and approval procedures vary in different countries. As a result, the lack of a standard procedure is likely to limit the exposure of market players in other markets.

Yet another key impeder to steady market growth is the accelerated movement of the ‘entomophagy’ culture. As the never-ending quest for protein is drifting manufacturers towards new sources of protein, including even insects. A number of literatures are coming to light that quantify the nutritional value of cricket flour, along with its protein profile, which has instigated a shift towards the newly-discovered protein source, away from vital wheat gluten.

Lucrative opportunities await market players, as consumers seek organic products, not only on their plate but also for entire well-being, and the positive impact of vital wheat gluten is inundating the cosmetics and personal care industry. This has encouraged market players to experiment with formulations and develop skincare and hair care products.

In recent times, vital wheat gluten is witnessing voluminous adoption for the formulation of cosmetic products that improve the quality of the hair and skin. Given the fast-replacement of ingredients in the highly competitive cosmetic industry, market players can collaborate with end users to ensure a streamlined supply of vital wheat gluten. 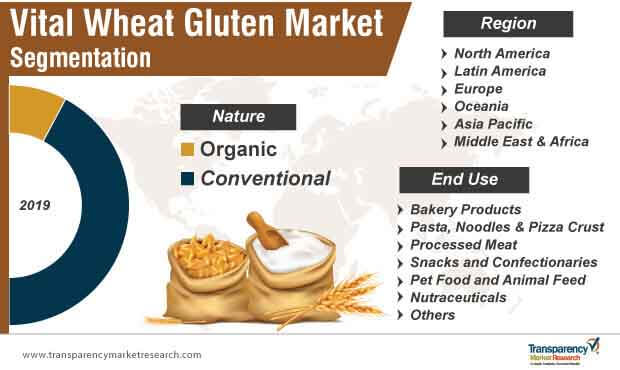 Stuck in a neck-to-neck competition with other brands? Request a custom report on “Vital Wheat Gluten Market”

Authors of the report opine that, the growth trajectory that of the vital wheat gluten market will be a moderate one, with concerns regarding gluten and GMO-based food products. However, a shift towards veganism and vegetarianism will enable channeled sales opportunities for market players. Analysts also believe that ease of availability will be a crucial key to market success, which can be achieved by entering into partnerships with online as well as offline retailers. Market players can also capitalize on consumer sentiments towards healthy products through effective and clear brand communication. Collaborations and partnerships with end users as well as distributors will remain integral to thrive in the vital wheat gluten market during the forecast period.

Increasing Demand for Vital Wheat Gluten as a Protein Source

Key players operating in the vital wheat gluten market, as profiled in the study include