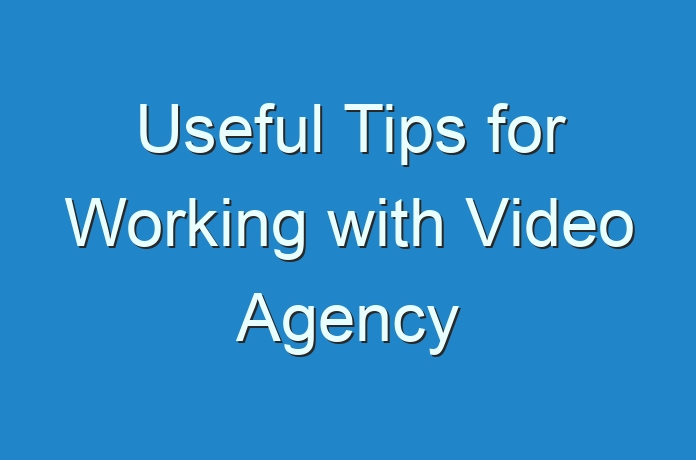 If a company decides to hire a video agency, they have to go through many important things. They have to consider the agency and its employees as one team. It can be saying that a great balanced workforce involves agencies, freelancer and employees that work in harmony. It is not an easy task thing but it can be effective and magical when you get it right. There is a large number of important tips that a company must follow while working with video agency and these tips are under:

The first and the most important thing is to communicate and delivers all the important information to the video agency. This major information includes the target audience for the company and the platform to show the live video. The agency should aware that the audience already aware of the brand or not. Other than that, video for the landing page might be changed from the ones on social media.

The video agency has to be aware of the tone of the company. After defining the purpose of video this is the most important thing. It is a great saying that strong emotions reflect strong reactions. No one knows the audience better than the company itself so holding the right way to deliver that emotion is significant. If a company has an audience with a start-up community and they want that their viewers to come away for their promo videos with an expectation and a feeling of trust then they will choose a friendly and personal tone where viewers listen from the real employees. On the other side, if the audience of the company is more corporate then the company can choose a formal tone while leaning on facts. Most of the video agencies help the company in the selection of the right tone.

After the composition of a team, it’s the time comes to start working as a single team. At this stage, everyone needs to make a discussion in which the vision of the project discusses. This thing plays a great role in the making of an outstanding project. At this point, the company listens to an in-depth creative vision from the video agency and takes the opportunity to course-correct. Other than that, the company provides its brand standards which include the elements of designs like font and color. In addition to all these things, the company can share the key performance indicators so everyone completes the project by holding the ultimate goals. The last and the major thing is to open new ideas along with honesty about expectations and who you are as a brand.

The company has to describe the scope of their project to the video agency. The agency will work according to the requirements of the company whether it can relate to the budget and features. Different video agencies provide different services like conception and scripting through post-production. In addition to that, some agencies provide the option of a shorter cut of the video to use on social.

The first question that the company asks from the video agency is ‘What’s the budget’. They have to be aware that what they are working with to presents a perfect picture of what they can achieve. At the time of setting a budget, the company should hold the Triple Constraint Theory in their minds that are also termed as Project Management Theory. It states that there should be a great harmony among the elements of quality, cost, and speed if a balance disrupts in any on the one the others will be affected too. Let’s take an example if a deadline is coming then the producer would not be able to produce a high-quality video by spending more money. On the other hand, if there is a limit on the budget then its impossible to produce high-quality especially under the time limitations.

Both the companies and the video agency have to do a lot of projects so it is very important to schedule all the things effectively. The company should discuss shoot dates and delivery timeline in advance. In addition to that, the company must make sure to include dates for the team to respond to feedback. In this way, everyone gets clear expectations from the start.

In every project, communication is the key to the successful accomplishment of the project. The company can ask from the video agency about the feedback regarding the pre-production, production, and post-production. The company as a client has to be responsive. If there is a lack of response then there might be a chance of late delivery of video. Working with the video agency considers as the game of connection. If the company hires the best and the most talented team but if they don’t keep the best communication, the night be dissatisfied with the results.

The company works with a video agency for several reasons. The first and most important reason is that the company hires the outsider to get their opinion. At that phase, the company gets a chance to shake up various things, pivot the strategy or fulfill the gaps among knowledge. The video agency has a team of fresh and experienced graduates of the current time who better knows the mind of the audience. So the company has a great benefit in hiring the video agency for their video making.