In 2018, the global anti-fog lidding films market was valued at US$ 589.9 Mn and is expected to expand at a CAGR of 5.3% during the forecast period. 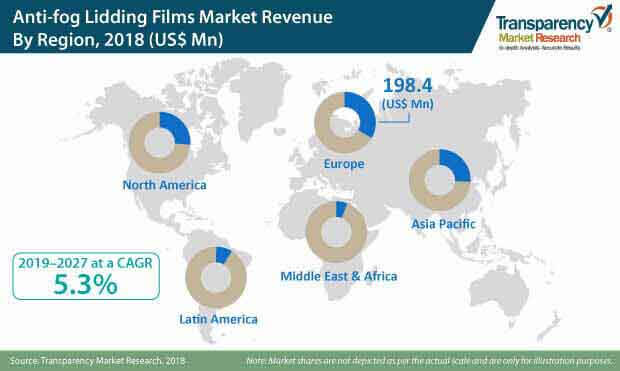 Consumers across the globe are increasingly concerned about hygiene when it comes to food and its packaging. An efficient method to achieve hygienic packaged food, which is free from micro-organisms and bacteria, is to enhance packaging solutions by incorporating specialty features in them. This has led to increased use of lidding films as they completely seal the product and prevent contamination. This, in turn, is expected to play a pivotal role in increasing the adoption of anti-fog lidding films in the packaging of fresh produce, meat, as well as dairy products.

Increasing Use of Anti-fog Lidding Films to Avoid Transportation Damages

Food products which need to be transported to longer distances have to be appropriately packaged to maintain their freshness till they reach the point of consumption. Transportation may affect the appearance of the product due to temperature difference, which might affect the perceived quality of the product. Anti-fog lidding films which have temperature and UV stability, superior heat-resistance, and good tensile strength to survive the potential transportation damages are thus expected to have a positive outlook in the coming years.

Independent studies have shown that consumers take very less time to shift to other brands if they face inconvenience in unpacking the product. This has created the need for a consumer-centric approach of packaging. The primary objective remains to design a product which provides not only ease of opening at the time of consumption, but also allows hassle free transportation. In order to achieve this, manufacturers are using lidding films with anti-fogging properties for their lidding applications.