The electronic space has evolved at a rapid pace in the past couple of decades. Rapidly changing industrial requirements, widening applications of electronic components, advancements in technology, and improvements in accuracy and precision provided by modern-day electronic components are some of the factors that have triggered the evolution of electrical and electronics sectors. The demand for trimmer capacitors, which are also known as variable capacitors, has witnessed a steady growth in the past few years. This factor is expected to drive the trimmer capacitor market during the forecast period (2019-2027). Trimmer capacitors are primarily used in circuits that require precise frequency levels and thus, are used in radio frequency (RF) equipment, oscillators, and communications equipment.

Want to know the obstructions to your company’s growth in future? Request a brochure @ https://www.transparencymarketresearch.com/sample/sample.php?flag=CR&rep_id=61086 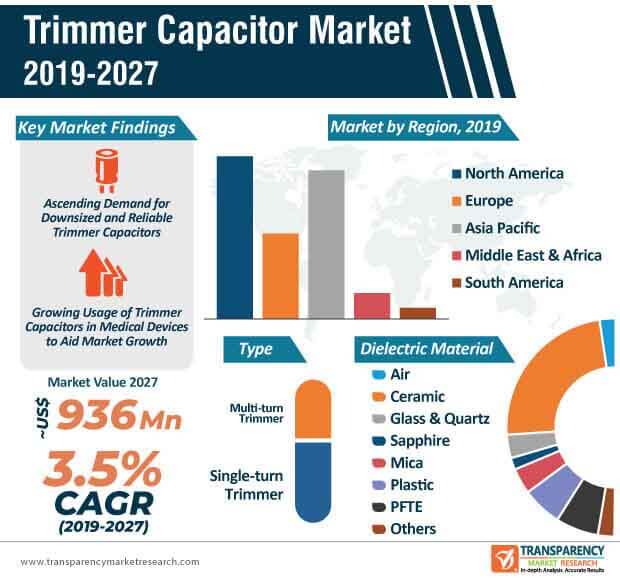 Trimmer capacitors have emerged as one of the most crucial components of non-implantable and implantable medical devices. Furthermore, to fulfill the growing demand for capacitors with improved performance and high reliability, manufacturers are leveraging advanced manufacturing technologies and testing methodologies. As far as the changes in design and raw materials are concerned, medical grade capacitor manufacturers are required to gain approval for their products from regulatory bodies such as the FDA. Within the trimmer capacitor market, applications of trimmer capacitors in medical devices are likely to generate high revenues.

Over the past decade, the demand for trimmer capacitors with improved reliability, performance, and smaller sizes has grown at a consistent pace. In the current market landscape, manufacturers are likely to focus on product innovation and expanding their product portfolio to meet these demands.

For instance, in September 2018, Murata Manufacturing Co., Ltd., launched a new NFC trimmer capacitor with enhanced voltage resistance and functional capabilities. The new product was primarily developed for applications in card readers that are integrated with an NFC function. Similarly, in August 2019, Passive Plus Inc. launched a new range of Air Tubular Trimmer Capacitors that are developed in accord with the required standards and have the desirable adjustment and mechanical precision. Product innovations will continue to gain significant momentum during the assessment period, owing to evolving end user requirements and regulatory standards.

The Israeli startup that managed to raise $ 6 million in less than a...