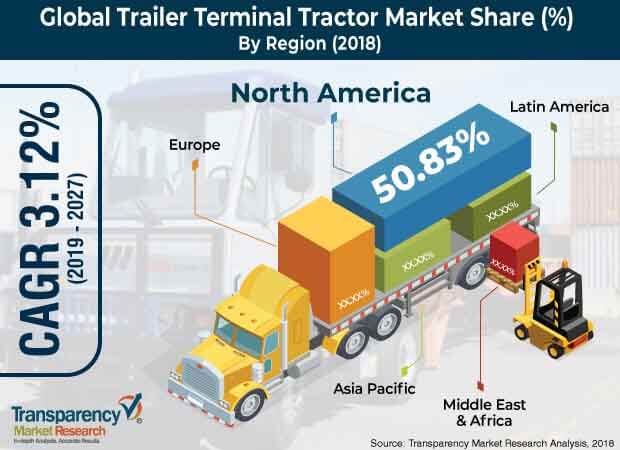 The global trailer terminal tractor market has been segmented based on by fuel, tonnage, trailer axle, end-use industry, technology, and region. Stringent emission norms have led to the development of electric trailer terminal tractor and the LNG powered engine. Governments across the globe are enacting stringent emission norms in order to reduce vehicle emission at ports and other places. Several manufacturers, such as Kalmar and Terberg, showcased their fully electric terminal tractors in 2018 and hence, the BEV segment is expected to expand exponentially during the forecast period.

Rising adoption of technology and automation in order to reduce human error and boost work efficiency is likely to prompt the adoption of autonomous tractors at a significant pace. However, the diesel powered trailer terminal tractor segment held a major share; however, the adoption of electric and LNG fuel based trailer terminal tractors is likely to increase during the forecast period, owing to stringent emission norms by sea port authorities along with emission regulatory bodies. Industries in North America extensively utilize terminal tractors owing to the presence of a prominent logistics industry in the region. However, port is the leading segment of the market in all regions across the globe. The above 100 tons segment is expanding at a sluggish pace owing to its very high load carrying capacity, which has limited applications. The between 50 to 100 tons segment is expanding a more rapid pace than the other segments, and is likely to hold a notable share of the market by end of the forecast period.

THE BIRTH OF ‘BIRTHDAY CAKES’