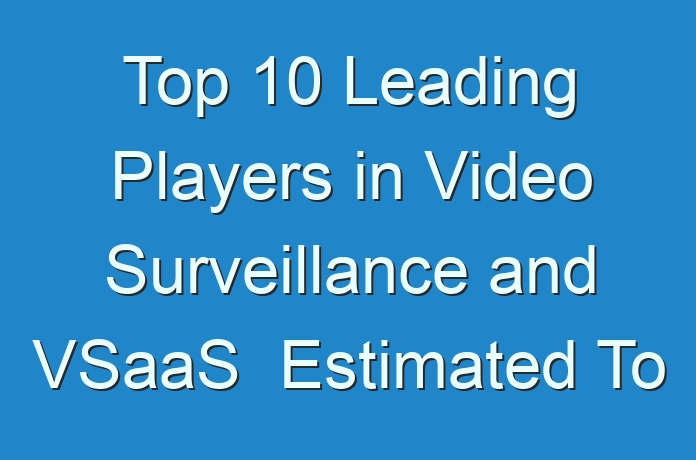 The demand for IP-based video surveillance systems is expected to grow due to significant innovations in security, network offerings, and most importantly dwindling costs of specialized products. Moreover, innovations are also playing a key role in minimizing the costs associated with the deployment of surveillance infrastructure. For instance, the advent of 360o video capturing technology has enabled users to replace around three to four Pan-tilt zoom (PTZ) cameras. The newly developed 360o video capturing technology is expected to be one of the most groundbreaking inventions within the video surveillance and VSaaS market.

Rapid advancements in technology, along with the introduction of artificial intelligence into the video surveillance and VSaaS market landscape has enabled stakeholders to develop cutting-edge VSaaS solutions. Market participants are expected to introduce new and innovative video surveillance solutions in the near future to gain a competitive edge.

For instance, in October 2019, Zain, an established digital service provider announced the launch of a newly developed VSaaS solution for customers at the enterprise level. The company revealed that the VSaaS platform would include a broad range of services on the company’s cloud, and simultaneously provide customers the convenience of accessing and managing the video recordings from any location at any point in time.

Video surveillance finds application in the security industry to prevent terrorist and criminal activities. Governments across the world are investing significantly in the development of the most sophisticated surveillance networks and expanding their utilization in order to strengthen the fight against street crimes and counterterrorism operations. According to the U.S. National Security Agency, since the 9/11 incidence, law enforcement agencies in the U.S. have been able to foil over 50 terrorist plots in the U.S. and other countries with the help of surveillance technologies. The impact of this driver is anticipated to be high during the forecast period. Globally, a major drive is taking place to bring most of the critical infrastructure under video surveillance, which includes government-funded installations around public infrastructure, roads, airports, and maritime and defense. Retail outlets and commercial premises are increasingly being brought under video surveillance due to security concerns and the need to monitor and understand the environment around them.

Investments in global infrastructure has been increasing over the years. Global energy infrastructure and public sector infrastructure such as railways, roads, airports, and communication networks need to be expanded and replaced. Coordinated efforts are needed to reinforce and maintain secure and resilient infrastructure including networks, assets, and systems vital for society. Furthermore, major upcoming sports events, such as the 2018 FIFA World Cup in Russia, FIFA World Cup 2022 in Qatar, and the 2020 World Expo in UAE are estimated to drive the demand for video surveillance products in the near future.

Marine Collagen Market Trends Together With Growth Forecast To 2026