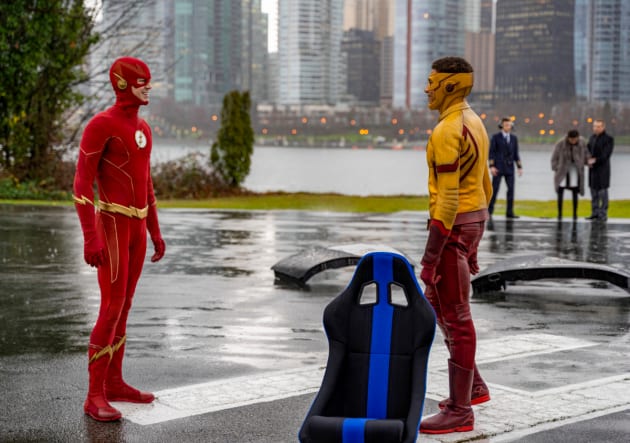 CW’s The Flash Season 6 is currently 15 episodes deep with more than a month delay in the release of its 16th episode. All we are waiting for is the release of its episode 16 that is expected to pop by the screens on April 21, 2022.

Yes, finally after such long wait, The Flash Season 6 Episode 16 is ready to release. Just a few more days and we will be able to watch our favorite superhero show running more deep into its sixth season.

Until its 15th episode, in The Flash Season 6, we witnessed the exorcism of Nash Wells who’s mind is somehow possessed by Thawne along with other Harrison Well’s doppelganger from all over the multiverse. Well, this was a side-effect of the crisis that causes the destruction of the whole multiverse thing. Barry, Cisco, and Cecile help the Nash to fight against Thawne who tried to use Nash’s past (death of Allegra’s doppelganger, Maya) as a trap to haunt him. Finally, with the Flash family’s help, Nash succeeds in overcoming Thawne’s possession.

However, on the other hand, Iris and Kamila’s mirror duplicate end up creating grave danger for the flash team. In their way to steal Prismatic Refractor from Mercury Labs, both of them confronted Sunshine, a powerful meta who then turns out to be a mole in CCPD. There we witnessed a breath-taking battle between Sunshine and Team Flash that almost costs Killer Frost’s life because, in the meantime, Barry fails to maintain his speed powers.

So, for now, all we have is that Eva has gotten the refractor. Let’s see what will be her next move and whether the real Iris and Kamila be able to figure out that she’s the one behind all this mirror trouble. On the other hand, Barry has decided to use Nora’s journal to create his own speed force.

The Flash Season 6 Episode 16 “So Long and Goodnight”

In the sixteenth episode, we will witness how Eva will use the Refractor to get herself out of the mirror without harming herself. Moreover, we will see how Barry will use Nora’s journal to create a new speed force as the original speed force has died.

It is hard to say that whether the Flash family will be able to figure out in the next episode that the Kamila and Iris living with them are in actual the mirror clones or not. Hope so that soon, they’ll figure it out or Iris and Kamila themselves will be able to find a way out of the mirror.

Let’s wait for the release of The Flash Season 6 Episode 16 to witness upcoming twists. Don’t forget, we have yet to see what else has been affected by the crisis ( A lot more interesting is yet to come).