The global smart speaker market is expected to reach US$ 18,472.1 Mn by 2026. The market is projected to expand at a CAGR of 18.01% during the forecast period from 2018 to 2026. According to the report, the global smart speaker market will continue to be influenced by a range of factors such as increasing number of companies proving highly advanced smart speakers around the globe, rising smart homes trend worldwide, and rising disposable income. Asia Pacific will continue to be at the forefront of global demand, with the market in the region growing at above 19% through 2026. 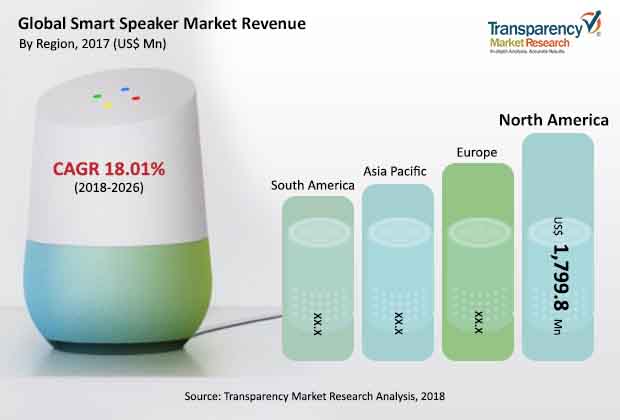 The global smart speaker market is bifurcated by components into hardware and software. Hardware based component segment is expected to surpass US$ 10,343.7 Mn by 2026. Within the hardware segment, smart speaker processor is expected to expand at a significant CAGR of above 18% during the forecast period. Smart speakers are getting more intelligent and rapidly becoming important devices used across homes. Processors are important as a smart speaker component, as it helps the smart speaker device to handle and perform multiple voice commands and tasks prompted by the user. Furthermore, it also helps in performing multiple tasks to support various functions such as music streaming, making phone calls, and device controlling.

Based on mode of sale, the smart speaker market is segmented into online and offline sale. The online mode of sale segment is expected to witness higher market share, owing to the rising demand for smart speakers worldwide and the ease of convenience it provides. Additionally, many well-established market players from the smart speaker domain such as Apple, Inc., Amazon.com, Inc., and Harman International are offering these smart speakers online, as it is easier to reach the global customers and helps in increasing sales opportunities.
Personal application segment expected to expand at a significant growth rate during the forecast period

On the basis of voice assistant systems, the smart speaker market is segmented into Amazon Alexa, Google Assistant, Apple Siri, Microsoft Cortana, and others. Amazon Alexa is expected to hold a higher market share of more than 55% in 2026. Amazon.com, Inc. unveiled its smart speaker named “Amazon Echo” in the year 2015 and it was the first to enter the smart speaker market. It also launched other versions of smart speakers namely “Amazon Dot and Amazon Tap” for the U.S. market and later on for the other bigger markets such as the U.K, India, and China.

North America is expected to hold higher market share for smart speakers during the forecast period. The growth is mainly due to the booming smart speaker market place with the presence of well-established players across the region, especially the U.S. and Canada. North America is home to many well-established players from the smart speaker domain including Apple, Inc., Amazon.com, Inc., Google, Inc., and Harman International. Furthermore, North America is witnessing higher adoption of smart speakers due to the continuously rising consumer preference toward technologically advanced products. Additionally, many companies across the U.S. are launching novel smart speakers made specifically for the particular industry or for commercial applications. For instance, in 2017, a start-up named “Askwithcue, Inc.” launched smart speakers named “Roxy” that is hospitality business focused and aims to replace hotel phones. Roxy is powered with an AI based voice assistant system that is fully customizable and under the control of the customer. This feature will help hotels to input easier commands for guests and help in planning more comprehensive capabilities other than speech-enabled assistants.
The market in Europe is projected to grow at a significant CAGR during the forecast period. The growth is the result of the launch of many smart speakers by well-established players across the European region. For instance, in April 2017, Google Inc. launched its smart speaker named “Google Home” powered by Google Assistant for consumers across the U.K.

Smart speakers are gaining popularity across the Asia Pacific region, especially across China, Japan, and India. Increasing number of smart homes and rising disposable income is expected to fuel the smart speaker market in this region. China is projected to hold a significant market share owing to the presence of large number of smart speaker providers especially local ones including Alibaba Group and Xiaomi, Inc. Alibaba Group provides smart speakers powered by its own voice assistant system at a very low price to compete with players such as Amazon and Google. In 2017, Alibaba Group also launched its smart speaker named “Tmall Genie” at a reduced price to compete with Apple HomePod, Google Home, and Amazon Echo. The new smart speaker powered by AI voice assistant will be priced at US$ 73 across the Chinese market.

Amazon.com, Inc., Apple, Inc., Harman International, Alphabet, Inc., Sonos, Inc., and Xiaomi Inc., among others are some of the major players operating in the smart speaker market profiled in this study. Details such as financials, SWOT analysis, business strategies, recent developments, and other such strategic information pertaining to these players have been duly provided as part of company profiling. Various players are providing novel smart speakers that help consumers to perform multiple tasks easily by using various voice commands. Also, market players are establishing partnerships, entering into strategic M&A, and expanding, to enhance their smart speaker offerings worldwide.

Global Chlorinated Paraffins Market is projected to expand 3.5% CAGR from 2019 to 2027