Sand production is a major challenge that engineers face during drilling and well completion operations in the oil & gas industry. Production of sand occurs due to earth stresses and additional stress caused by the drilling activity. This breaks down the rocks comprising crude oil and natural gas. This is prominent in unconsolidated rock formations. The produced sand erodes equipment, creates down-hole cavities, and blocks tubing. This can hamper the production process. In certain cases, the casing can collapse due to sudden and extreme changes in pressure and stress during drilling operations. Additionally, down-hole equipment can deteriorate due to the accumulation of sand. In extreme cases, the accumulation of sand can result in severe blowout. Ensuring sand-free crude oil and natural gas production is critical to the effective maintenance of well productivity over an extended period of time. Production of sand while drilling adversely impacts well operations. Therefore, sand control systems play an important role in the proper functioning of a well. 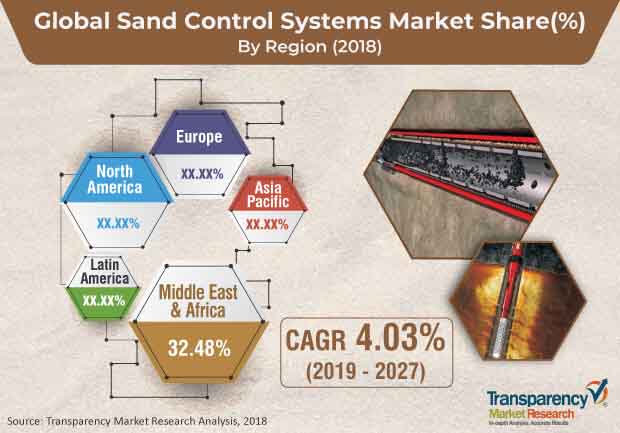 Based on technique, the global sand control systems market has been segmented into gravel packing, standalone screens, resin coated gravel, plastic consolidation, and others (including rate exclusion and high energy resin placement). Gravel packing was the dominant segment of the global sand control systems market in 2018. Any type of well of any deviation can be easily accommodated and gravel packed. Large numbers of petroleum companies are using this sand control technique in majority of wells across the globe. This technique is expensive, but effective when properly implemented. It is also considerably flexible. Standalone screens is another commonly employed technique for sand control globally. However, the technique needs to be customized as per specific well requirements.

Based on application, the global sand control systems market has been bifurcated into onshore and offshore. Onshore was the dominant segment of the global sand control systems market in 2018. The segment is projected to expand at a moderate pace during the forecast period. The offshore segment is expected to expand rapidly during the forecast period due to the rise in offshore drilling activities across the globe. The number of offshore wells drilled in 2018 were more than those drilled in 2017.

Request For the Customization – https://www.transparencymarketresearch.com/sample/sample.php?flag=CR&rep_id=2664