While the personal mobility landscape is undergoing profound changes, robo-taxis are emerging as a new trend that is changing consumer perception towards mobility as a service. Autonomous vehicles (AVs) are gaining immense popularity in the ever-evolving public transport landscape, which is now being integrated with a broader mix of mobility services.

Taking into consideration the enormous sales potential of robo-taxis in the public transport industry, global auto giants are foraying into the robo-taxis market to leverage lucrative opportunities. With prominent dynamics of the robo-taxi market commonly viewed through the lens of technology, the competitive landscape of the market is likely to be characterized by a mounting number of collaborations between automakers and technology companies, in the coming years. 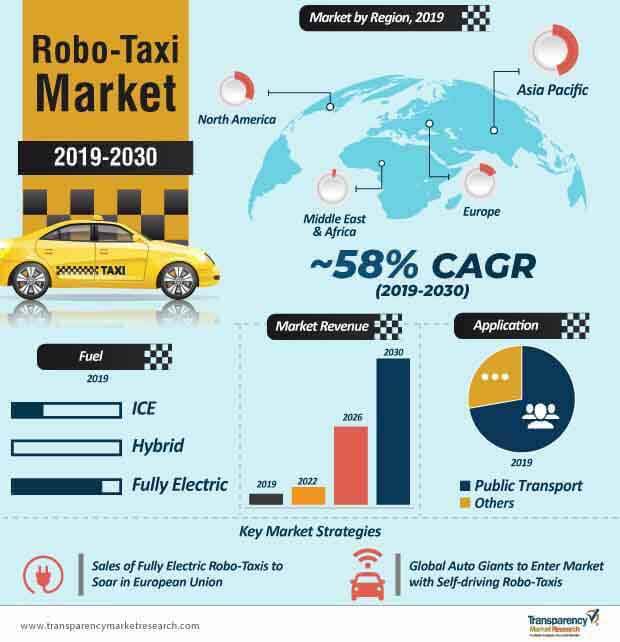 The global market for robo-taxis is moderately fragmented, with the presence of a large number of leading as well as new businesses in the market. Uber Technologies Inc., Tesla Inc., Beijing Xiaoju Technology Co, Ltd., Waymo LLC, and EasyMile are among the leading companies that are gaining a strong foothold in the market. Meanwhile, a slew of lesser-known technology companies such as Aptiv, AImotive, Baidu, Inc., Aurora, and Keolis, are gaining immense growth in the market, with increasing focus on public transport and the energy generation & storage aspect of robo taxis.

Uber unveiled a third-generation of autonomous robo-taxis in collaboration with Volvo in the United States (U.S), in June 2019, and the company also announced that it will commence with the testing of these cars by 2020. However, with the incident of an autonomous car meeting with an accident in Arizona, U.S., which caused the death of a pedestrian, a majority of leading companies in the robo-taxi market have announced to have put their autonomous tests on hold.

While global auto giants are moving towards consolidating their position in the robo-taxi market, smaller technology companies are also entering the market to collaborate with big companies as their independent service providers. In June 2019, Waymo LLC announced that it had signed an agreement with Renault and Nissan for the strategic development of self-driving cars for the market in France and Japan, along with the announcement of possibly entering other countries in Asia. In April 2019, Uber Technologies Inc.’s Advanced Technologies Group (Uber ATG) announced that it had joined forces with Toyota, DENSO, and Softbank Vision Fund, and these companies have invested US$ 1 billion in the company.

LED Display Driver And Lighting IC Market Plying for Significant Growth During 2013 to...