The policing technologies market in Europe is characterized by the presence of large multinational companies concentrated on research and development activities so as to remain competitive. The rise in terrorist attacks across the region, the surge in crime rates, and severe migration crisis have compelled security forces in Europe to adopt advanced policing technologies.

Police departments in some of the most developed regions of the world have been relying on policing technologies to enhance their responsiveness, control crimes, and reduce fatalities. The policing technologies market in Europe is poised to expand at a 6.0% CAGR from 2016 to 2024, with the opportunity rising from US$1.4 bn in 2015 to be worth US$2.4 bn by the end of the forecast period.

Policing Technologies Most Widely Used for Detection and Surveillance

Aviation technology is likely to expand at the highest CAGR of 6.8% during the forecast period of 2016 to 2024. These technologies have proven to be extremely essential in time-critical situations such as searching for missing people or surveying a hostage scene. The demand for aviation technologies is anticipated to receive a boost from the rising use of drones for security purposes. 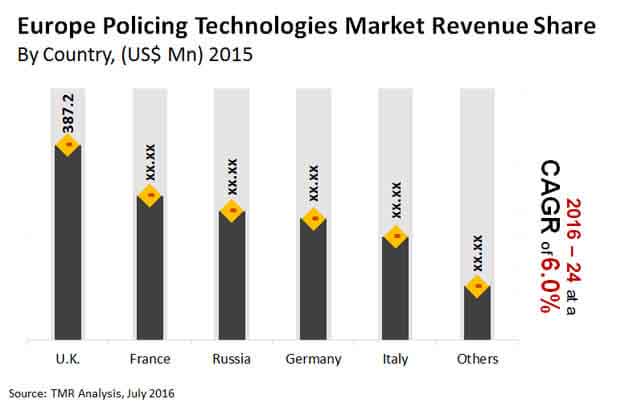 France is also a major market for policing technologies in Europe and is fueled by the introduction of computers or mobile devices in police cars. The market in France also benefits from the rising application of video surveillance technology and image processing software by the police force.

Although the U.K. is predicted to emerge as the fastest growing regional market for policing technologies by 2024, the market in Russia is forecast to witness rapid growth as well. The increasing adoption of drones by the police to control traffic is likely to be responsible for this future growth.

Policing technologies can be defined as numerous technological and scientific techniques, equipment, and methods utilized in various policing activities. In recent few years, the advancement in technology has changed the way of working of many sectors. Thus, there are several technologies specifically intended for the purpose of policing activities and focused on crime prevention and arrest of criminals.

In recent few years, there is remarkable growth in crimes and terrorist attacks in all worldwide locations. As a result, the police departments in many developed nations are growing use of advanced technologies to perform a range of policing activities. This factor is working as a key driver for the growth of the global policing technologies market.

The global policing technologies market experiences presence of many well-entrenched players. To maintain the leading position in this scenario, major players in the market for policing technologies are strategizing their business moves. Many enterprises in the market are growing investment in research and development activities. The main motive of this strategy include new product development as well as upgrading the existing products.

The recent COVID-19 pandemic has impacted negatively on the growth of almost all industrial sectors including policing technologies market. To restrict the spread of coronavirus disease, the government authorities of many countries from all across the globe have employed stringent regulations related to the national and international travelling. This aside, the government bodies are growing their investments toward the discovery of new vaccines for coronavirus. As a result, the other government sectors might experience shortage of funding intended for incorporation of advanced technologies. On the back of this reason, the global policing technologies market is likely to experience decreased sales in the years to come.

Managed Security Services Market Market To Expand At 15.40% Cagr Due To Increasing Application...