Transparency Market Research (TMR), a U.S. based market research and analysis firm recently published a market study on the global passive optical components market. According to the research report titled “Passive Optical Components Market – Global Industry Analysis, Size, Share, Growth, Trends and Forecast, 2014 – 2020”, the global passive optical components market will expand at a remarkable 21.1% CAGR from 2014 to 2020. If the figure holds true, the overall valuation of the market will be US$38.19 billion in 2020 increasing from US$10.01 billion in 2013.The TMR study states that the escalating demand for broadband bandwidth across the Asia Pacific and Rest of the World (RoW)together with the expansion of Passive Optical Networks (PON) in Asia Pacific are the major factors propelling the global passive optical components market. 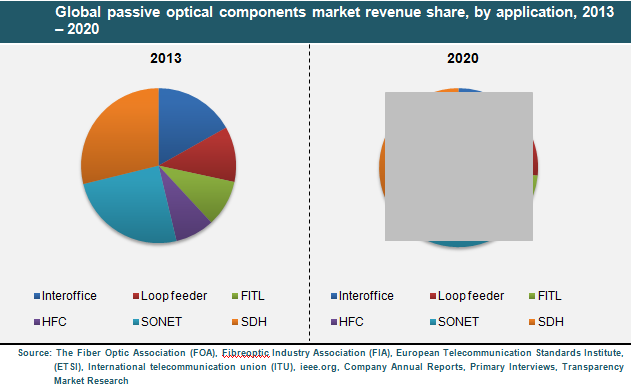 According to the research report findings, the multiplexers/de-multiplexers wavelength division dominated the components segment of the market in 2013. The segment was trailed by patch cords and pigtails in 2013. Being largely driven by the emergence of ultra-high-capacity optical networks, this segment accounted for 12.73% of the market in the same year.Owing to the unfathomably rising demand for internet communication bandwidth and development in fiberoptic technologies at an unparalleled pace, the optical amplifiers and optical attenuators segment is projected to grow at 22.0% and 21.8% CAGR respectively.

Geographically, Asia Pacific and Rest of the World is expected to continue its dominance in the global passive optical components market, followed by North America and Europe. Rapid economic growth witnessed by Asia Pacific and Rest of the World which led to increased investments in communication infrastructure, rise in the development  of networking technologies and deployment of newer fiber optic systems will contribute significantly to the growth of the passive optical components market in the major economies located in this regions.