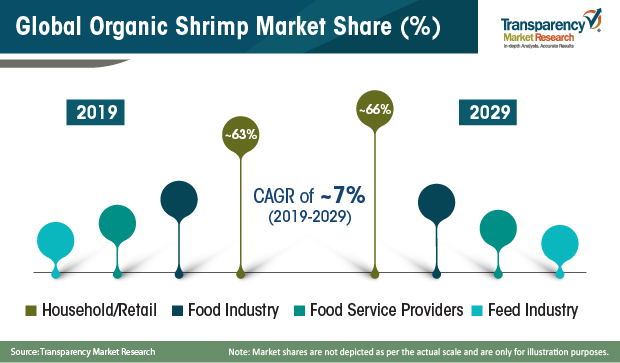 According to a new study by Transparency Market Research, the sales of organic shrimp are expected to reach ~US$ 350 Mn in 2019, and record a CAGR of 7% throughout the forecast period till 2029. Growth of the organic shrimp market remains driven by a slew of factors, which range from rising demand for organic seafood products and changing regulations in the food & beverage industry, to growing awareness regarding the benefits of organic food products among consumers.

Organic shrimp is an import-oriented market, offering ample scope for players and new farms to enter the domestic and international markets. The demand for organic shrimp is high across the globe, especially in the U.S. and in European regions. With Asia representing ~40% of total organic shrimp production, new farms have been set up in key countries by players anticipating new opportunities for the growth of the organic shrimp market in the region.

China is by far a large organic shrimp producing country, followed by India, which reported an extraordinary increase in production during the early 2000s. On the other hand, production in Thailand and Vietnam has developed significantly during the past decade in terms of volume. Such markets provide ample opportunities for existing and new players to set up new farming facilities in the organic shrimp market.

Regional integration was lacking in Latin America as a result of major economies such as Brazil and Argentina that had not adopted free trade policies. However, the scenario has changed in recent years. After the successful adoption of free trade agreements by Peru and Mexico, other countries have started adopting free trade due to its various benefits. Free trade has helped in the integration of the supply chain, which results in increasing trade activities and boosts trade volumes between countries.

Free trade has increased access to higher-quality, lower-priced goods. Cheaper imports, particularly from countries such as China and India, have also eased inflationary pressure in the Latin American region. Organic shrimp manufacturers are now gaining easier access to other countries in the Latin American region, which is expected to bolster the growth of the organic shrimp market over the forecast period.

Pet owners are becoming more cautious about their pet’s health and diet, due to which, the demand for organic and natural feed is witnessing an increase. A shift to organic and natural food is perceived to alleviate allergies in pets. These food offerings are free from chemical additives, toxic pesticides, and artificial components, which may cause discomfort to pets. Additionally, the use of natural ingredients strengthens the immune system of pets.

Organic Shrimp Market by End Use

Automotive Engine Valves Market is highly driven by need to reduce the impact of...