The increasing efforts made by the U.S. government to phase out conventional lighting systems and replace them with LED lighting systems is making its mark in every sphere, states Transparency Market Research. This has resulted in a drop in the prices of LED, steering the attention of consumers towards this technology and increasing its adoption in all the possible places. Stadiums, too, are making heavy investments in LED screens given their various advantages such as the ability to surface mount them amongst others. The growing trend of advertising via LED stadium displays is also propelling the usage of these screens.

The growing number of stadiums across the world, increasing live events and concerts, and the essential need to enhance the viewing experience are all expected to drive the global LED stadium screens market in the coming years. Analysts state that the opportunity in the global LED stadium screens market will be worth US$1.93 bn by the end of 2022 as compared to US$1.16 bn in 2014, expanding at a CAGR of 6.6% between 2015 and 2022. The rising investment in product innovation will also offer several growth opportunities to this market in the coming years. 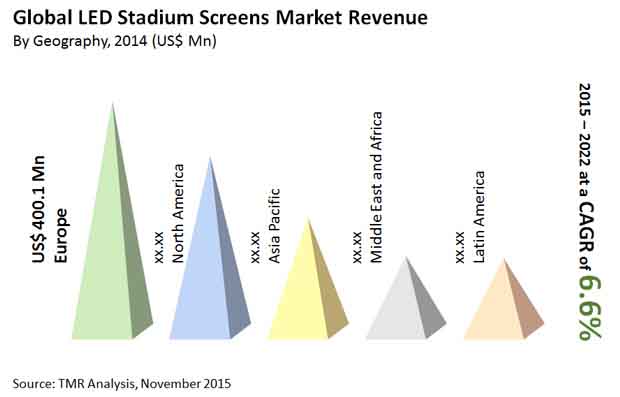 Meanwhile, Asia Pacific is also expected to witness a steady growth of LED stadium screens market. This demand will be fueled by ongoing infrastructural developments and rising sporting activities. The development of stadium infrastructure in emerging countries of Japan, Taiwan, India, and China is expected to create tremendous potential for this market in the near future. This regional market will also be driven by the strong presence of leading manufacturers and strong distribution channels.

Surface Mounted Technology to be Most Preferred

In terms of technology, the surface mounted technology segment is expected to progress at the fastest CAGR of 7.7% in the forecast period. Out of the color display segments, full-color LED displays formed the leading segment and will continue in this position due to their increasing applications in arenas and stadiums across the world.

Perimeter advertisement boards, fixed replay screens, and scoreboards, and are all examples of LED stadium screens that are utilized around organizations, clubs, arenas, and sports stadiums. Organizers are increasingly using them to boost broadcast capabilities and also marketing revenue. LED stadium screens are used both indoors and outdoors. A rise in the government programmes to promote these products is likely to support growth of the global LED stadium screens market in the years to come.

The global LED stadium screens market is predicted to be driven by the rising prevalence of stadiums around the world, increased live concerts and events, and the important need to improve the spectator experience in the years to come. In the projected timeframe, surface mounted technology is projected to emerge as a technology that will transform the LED displays business. Full-color LED displays is likely to dominate the color display domain and is estimated to do so due to their growing use in stadiums and arenas around the world.