Generator is a machine that converts mechanical energy into electrical energy. Two types of generators are available in the market: stationary and portable. These generators can be used in standby, prime and continuous, and peak shaving applications in various end-use sectors such as industrial, commercial, and residential.

Increase in Demand for Electricity

Power consumption has increased significantly across the globe, especially in Asia Pacific, over the last few years. Strong growth of economy and rise in population have boosted the consumption of power. Increase in infrastructure development activities is also driving the demand for electricity. However, production of electricity by utilities is not sufficient to meet the global demand for power. This has created scope for generator sets to fill in the gap between power generation and consumption. 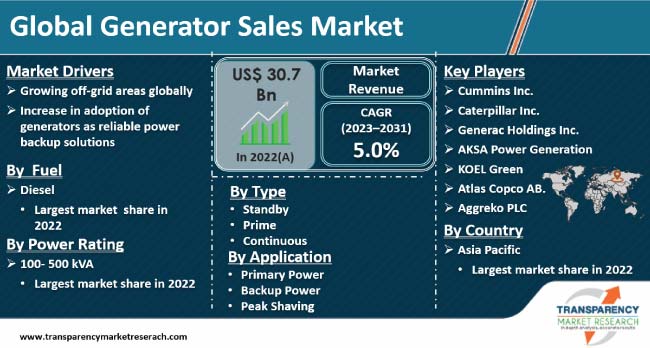 The prevalent practice of renting generators is a major factor hampering the sale of generator sets. Consumers prefer to rent portable generators than generator sets. Portable generators offer several advantages over conventional generator sets. For instance, they can be easily transported from one place to another. Low weight and small size allows them to be transported and handled easily. They also require low amount of fuel. Certain industries such as construction, agriculture, and automotive repair are prefer to opt for rental generators, as these are portable and easy to handle. Renting is a more affordable option than buying if generators are needed for a short period of time.

Renewable energy is rapidly gaining traction across the globe. Europe leads the world in terms of adoption of renewable energy. Countries in the region have managed to substantially shift from combustible fuels toward environmentally efficient and clean power generation methods such as wind, solar, geothermal, and hydro energy. A few member countries of the European Union have already exceeded the 2020 target of the share of energy from renewable sources. However, renewable energy sources cannot provide consistent power. They are dependent on natural climate. For instance, solar energy can be produced during daytime, while wind energy can be produced when the wind is blowing with a certain force. This creates the need for backup power sources. Generators is one of these sources. Generators can provide the necessary power backup when renewable energy fails. Demand for generators is anticipated to increase in the near future due to the rise in the use of renewable energy.

In December 2017, Cummins, Inc. announced the launch of the new RS125 and RS150 models in the QuietConnect series generators. The generators have a capacity ranging from 13 kW up to 150 kW to back up larger homes and small businesses, including dental and medical offices, grocery stores, gas stations, and strip malls. In January 2017, Generac successfully completed the acquisition of Motortech Holding GmbH & Co. KG. This move strengthened the company’s position in the power generation market in Europe. In May 2016, Briggs & Stratton Corporation launched 8000 watts Elite Series, the first Bluetooth portable generator in the world. The generator is equipped with StatStation branded wireless Bluetooth device, which makes it convenient for customers to monitor the generator from inside their homes. In 2016, Caterpillar Inc. launched a new RP series of portable generators with four basic models ranging from 3.6 KW to 7.5 KW. In February 2015, KOEL Green signed a Memorandum of Understanding (MOU) with MTU Friedrichshafen, GmbH for building and commissioning emergency diesel gensets (EDGs) for future requirements of Nuclear Power Plants (NPP) in India.

Strategic Insight into the Top Lidding Films Market, Forecast to 2030