According to a new report by Transparency Market Research (TMR) titled ‘EMI Shielding Materials Market – Global Industry Analysis, Size, Share, Growth, Trends, and Forecast, 2018–2026’, the global EMI shielding materials market was valued at around US$ 5,400 Mn in 2017 and is anticipated to expand at a CAGR of over 6% from 2018 to 2026. Electromagnetic interference (EMI) can be defined as the electromagnetic field in radio frequency spectrum caused by nearby electronic devices, which can negatively affect the working of electronic devices located in surrounding areas. The electromagnetic field is also harmful to humans. Hence, EMI shielding materials such as metals, laminates, and conductive coatings are used to surround electronic devices and guard them against electromagnetic frequencies. These materials are extensively employed in defense, electronics, aerospace, automotive, and other industries where large amounts of electronic communication are used. Majority of electronic devices and equipment that are sold across the globe are manufactured in Asia Pacific and exported to other regions such as North America, Europe, Latin America, and Middle East & Africa. Hence, Asia Pacific is a major consumer of EMI shielding materials. 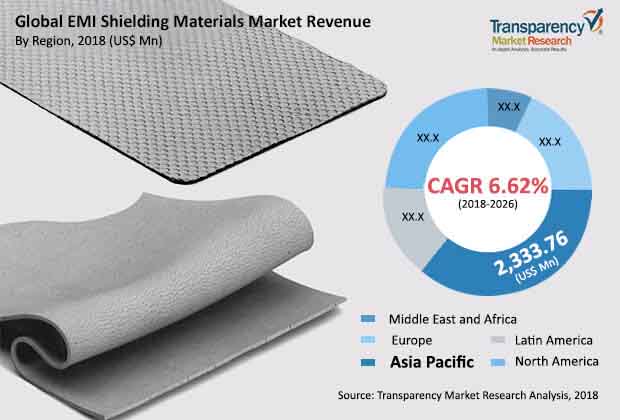 Growth of the telecommunications industry drives the market

Use of EMI Shielding Materials to Increase in the Defense Industry

Many devices and equipment in the defense industry such as GPSs, radars, military satellites, and handheld communication devices require EMI shielding materials. The number of devices using electromagnetic signals has increased due to the development of advanced weapons such as fighter aircrafts and drones. This has increased the importance of ensuring that electromagnetic signals do not disrupt military devices, as improper working of devices can risk lives of soldiers. As a result, the importance and use of EMI shielding materials is expected to increase in the defense industry.

In terms of material, the market has been categorized into conductive coatings, metals, conductive plastics, laminates, and others. The conductive coatings segment is likely to increase at a considerable pace during the forecast period, as it can be used individually as well as in combination with other materials such as conductive plastics and laminates. The metals segment is also expected to expand at a substantial pace, as these can be used in a wide range of end-user industries such as automotive, defense, aerospace, and telecommunications. In terms of applications, the market has been segmented into defense, electronics, automotive, telecommunications, aerospace, and medical. The defense segment is expected to expand at a rapid pace due to the increase in activities such as manufacturing and innovation in the industry. This segment is likely to be followed by the automotive segment, which has been a consistent consumer of EMI shielding materials. In terms of region, the market has been divided into North America (the U.S. and Canada), Latin America (Brazil, Mexico, and Rest of Latin America), Europe (Germany, the U.K., France, Italy, Spain, Russia & CIS, and Rest of Europe), Asia Pacific (China, India, Japan, ASEAN, and Rest of Asia Pacific) and Middle East & Africa (GCC, South Africa, and Rest of Middle East & Africa).

Biological Seed Treatment Market will expand at a CAGR of 10.2% by 2026