Key factors driving the demand for cast polypropylene packaging films across the globe are rising consumption of convenience food, high demand for packaging solutions that enhance shelf life, and growing preference for cost-effective films with a high moisture barrier. The cast polypropylene packaging films market in Asia Pacific and Middle East & Africa was promising in the past. This was attributable to rapid urbanization, growing population, and increasing disposable income of middle-class families in these regions. The outlook for the market in Asia Pacific appears promising for the forecast period also. In 2017, Polyplex Corporation Limited expanded its packaging films business in Indonesia to cater to the rising demand in the country. Other global players are also planning to expand in Asia Pacific during the forecast period.

Planning to lay down future strategy? Perfect your plan with our report sample here https://www.transparencymarketresearch.com/sample/sample.php?flag=S&rep_id=25445 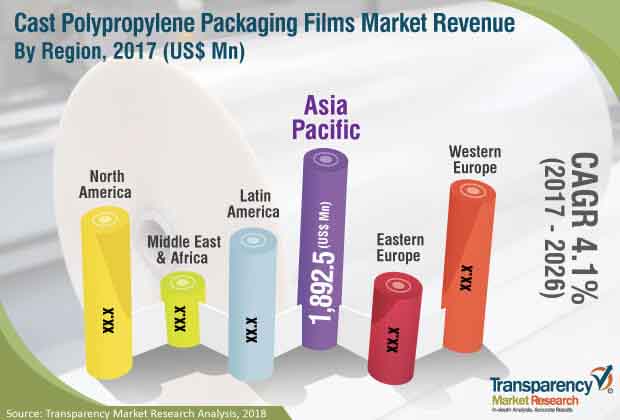 The cast polypropylene packaging films market has been segmented based on thickness, packaging type, and end-use. In terms of thickness, the market can be classified into up to 18 micron, 18–50 micron, 50–80 micron, and above 80 micron. Up to 18 micron was the dominant segment, accounting for over 40% of the market share in 2017. In terms of packaging type, the cast polypropylene packaging films market has been divided into bags & pouches, laminations, wraps, labels and others. Bags & pouches was the dominant segment, accounting for about 30% of the market share in 2017. Bags and pouches are widely employed in the packaging of beverages, snacks, and various other food products. Growth of this segment is directly linked to output of the food & beverages industry. The wraps segment is expected to witness significant growth in the near future, due to increase in the demand for ready-to-eat and bakery products. Suppliers of wraps, laminations, and bags and pouches made of CPP packaging films have augmented their manufacturing capacities and developed new products in response to dynamic market conditions. For example, American Profol, Inc. has developed two new pouch technologies under its CPPouch segment. It has also won ‘German Packaging Award’ in the category of ‘Sustainability’ for its CPPouch technology.

Demand for cast polypropylene packaging films is largely driven by rise in the output of the food & beverages industry. Growth of the food & beverages sector, particularly in Asia Pacific, is driving the demand for cast polypropylene packaging films. The floral segment is also witnessing significant growth. Also, the health care segment is anticipated to present lucrative growth opportunity to the market in the near future.

What are the reasons to choose imprenta rather than any other printing company?

Palm Oil Market to Register a Stout Growth by 2031-end