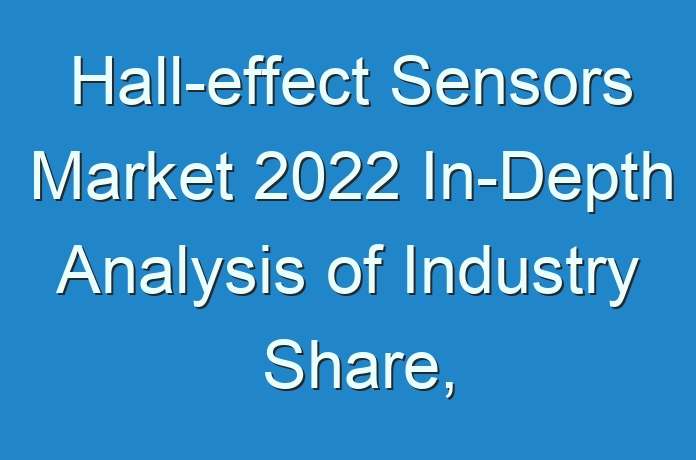 Advancements in Sensor Technology and Rise of Industry 4.0 to Drive Market

Ever since the discovery of ‘Hall-effect’ nearly a hundred years ago, the principle has been increasingly being used for a plethora of industrial and commercial applications. Over the past two to three decades, a number of practical applications of hall-effect sensors has emerged in a range of industries, including automotive, telecommunication, and consumer electronics. At present, the adoption of hall-effect sensors continues to grow in a broad spectrum of consumer and industrial products such as machining tools, computers, medical equipment, sewing machines, etc. Technological advancements coupled with the advent of the industrial automation trend are some of the key factors expected to shape the growth of the global hall-effect sensors market during the forecast period.

Axial hall sensors, cryogenic hall sensors, and transverse hall sensors are among the most extensively used hall-effect sensors worldwide. The onset of Industry 4.0, the booming automotive sector, especially in the Asia Pacific region, and the dwindling prices of raw materials and sensor technology have provided a solid support to the overall growth of the hall-effect sensors market during the assessment period. As per current trends, the automotive sector, along with the consumer electronics segment, is likely to provide lucrative opportunities to the players operating in the current hall-effect sensors market landscape. Moreover, leading market players are increasingly investing resources toward the development of new products, expanding their presence in other regional markets, and curating impactful digital marketing strategies to increase sales.

At the back of these factors, the global hall-effect sensors market is anticipated to cross market value of ~US$ 2.9 Bn by the end of 2030.

In the current hall-effect sensors market landscape, market players are increasingly focusing on expanding their market share by launching new products and leveraging technical expertise of other competitors and forge strategic alliances to gain a competitive edge in the current market landscape. For instance, in June 2020, CERN Partner and Paragraf announced that both companies are entering a partnership to develop a new hall-effect sensor. While strategic partnerships are expected to grow in the upcoming years, product launch is likely to remain the most impactful growth strategy. In April 2019, TDK launched a novel 3D Hall Effect position sensor– a sensor that is increasingly gaining traction for autonomous driving applications.

Stuck in a neck-to-neck competition with other brands? Request a custom report on Small Cell 5G Network Market

The outbreak of the novel COVID-19 pandemic has played an imperative role in disrupting the growth of several core industrial sectors, including automotive, consumer electronics, and telecommunications. The demand from automotive and consumer electronics sectors is projected to decline in 2020, due to stringent lockdown, trade, and transportation restrictions. In the COVID-19 era, the demand for touchless hall-effect sensors is on the rise across various industries– a factor that is likely to direct the hall-effect sensors market toward the path of recovery during the COVID-19 pandemic.

Usage of Hall-effect Sensors in Automotive and Telecommunication Sectors: A Key Driver

East Asia Fibrous Casings Market to Present an Absolute $ Opportunity of US$ 50...