Flight Data Monitoring and Analysis (FDMA) is used to enhance flight crew performance and air traffic control procedures. Thus, flaws in the aircraft operations can be detected before they lead to major accidents thus developing a preventive and corrective action. For this reason, they are integrated with the aircraft operator’s safety management system. In different regions of the world, the concept of FDMA is addressed differently. International Aviation Civil Organization (ICAO) has made FDMA mandatory for aircrafts above a specified maximum certificated take-off mass. This is expected to be the major driver for the Flight data monitoring and analysis market during the forecast period. According to the research report, the global flight data monitoring and analysis market is expected to be worth US$1,623.16 mn by the end of 2025 from US$677.6 mn in 2016. During the forecast years of 2017 and 2025, the global market for flight data monitoring and analysis market is estimated to progress at a CAGR of 10.4%. 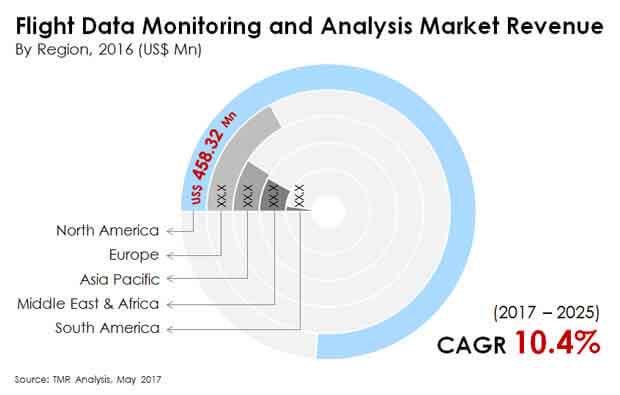 On the basis of end use, the global FDMA market is divided into civil, which includes commercial and general, and military. The civil segment includes all the non-military aviation activities, which comprises both commercial and general aviation aircrafts. The commercial sub segment includes aircrafts that are used for transportation of passengers and cargo loads while general sub segment includes aircrafts for business meetings, flight training, personal travel, recreational flying, medical transport, search and rescue, agriculture aviation, aerial firefighting, pipeline patrol, and many more applications. Due to larger number of activities the civil segment is estimated to the lead the global market over the coming few years.

On the basis of geography, the global FDMA market is likely to be driven by the Asia Pacific and the Middle East region. Emerging economies in these regions that are focusing on increasing the safety standards in the aviation industry is expected to support the market. Furthermore, the growing general aviation in Asia Pacific and Middle East are expected to be the possible reasons for its growth in the forecast period. However, North America held a major share in the overall market in 2016, which was closely followed by Europe. North America is estimated to register a CAGR of 8.8% in the global market between 2017 and 2025.

The demand within the global flight data monitoring analysis market is slated to rise at a formidable pace in the times to follow. Advancements in the aviation industry have created formidable avenues for growth within this market. The focus of this industry on fetching key data related to positioning and control of flights is an important consideration for decision makers. Decision makers in the aviation industry are under tremendous pressure to provide enhanced security to the masses. This has compelled them to induct new safety nodes and technologies. Therefore, the global flight data monitoring analysis market is projected to grow at a stellar pace.

The Reason why People are using CBD Gummies as Medication