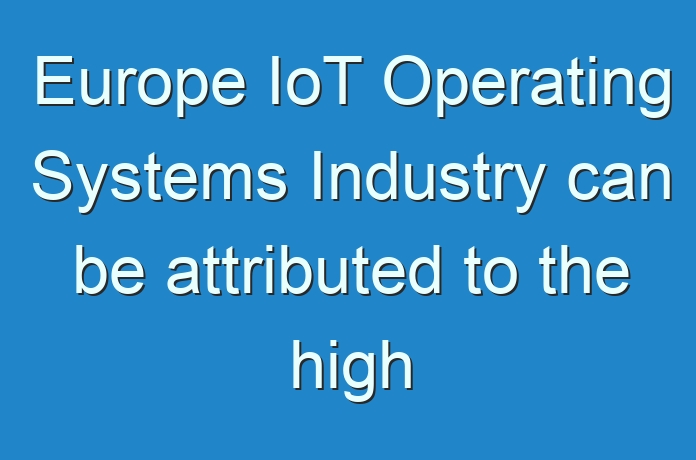 In the current day and age, new technologies and innovations have established an integral place within the human ecosystem. Technological advancements in various industrial sectors have paved the way for new products, concepts, and redefined consumer trends in many ways. The groundbreaking discovery of the Internet is considered as one of the key drivers of social evolution, as it has revolutionized an array of domains, including healthcare, education, and manufacturing. Advancements in the Internet have enabled efficient connectivity across multiple platforms. The considerable progress made by the Internet of Things (IoT) over the past few years has played a key role in clearing the path for new developments in the Internet space.

Over the past decade, IoT operating systems have taken notable strides at a rapid pace due to advancements in technologies that support the IoT. At present, Windows and iOS are some of the most popular operating systems that are in use across the world. However, as real-time responses are imperative for IoT functions, these conventional operating systems are proving to be incompetent due to which, the development of efficient IoT operating systems is gaining noteworthy momentum. As the adoption of IoT continues to grow at an exponential pace around the world, the IoT operating systems market is currently poised to witness massive growth during the forecast period.

At the back of these factors, along with a huge influx in demand for IoT in the development of smart factories and cities, the global IoT operating systems market is expected to attain a market value of ~US$ 20 Bn by the end of 2030. 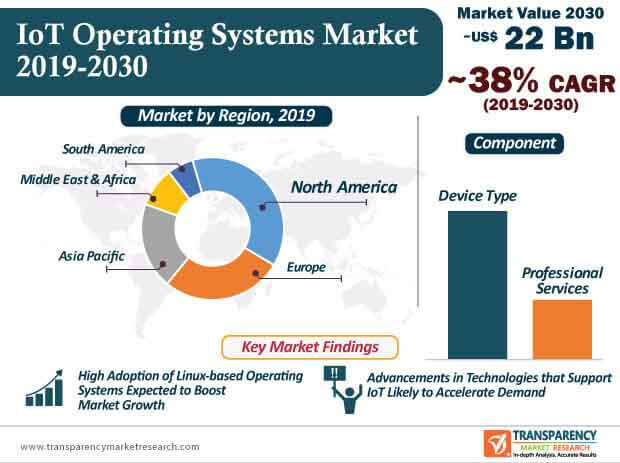 IoT developers across the world are increasingly investigating the potentials of various operating systems that are most compatible with the requirements of the IoT sector. At present, Linux continues to remain the most deployed operating system in a broad spectrum of computing applications. Although other operating systems, including Windows and FreeRTOS are gaining traction, Linux is expected to remain at the forefront, particularly in the first half of the forecast period. 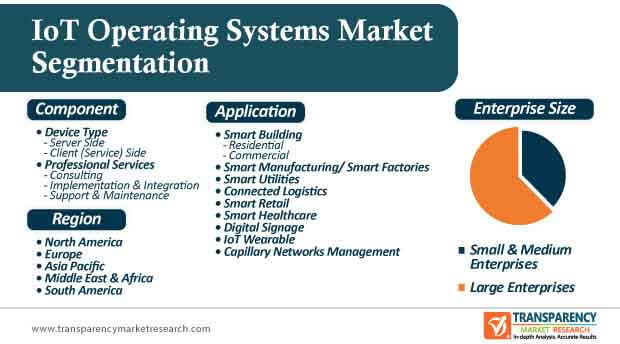 While Linux and FreeRTOS-based IoT operating systems are making inroads in the global IoT operating systems market, the adoption of Windows is expected to remain steady over the forecast period. While open-source software solutions such as Linux are likely to dominate the global IoT sector, open-source databases, including My SQL, Influxdb, and MongoDB are increasingly being deployed in the IoT sector.

Demand from Healthcare Likely to Grow Amid COVID-19

At present, the ongoing COVID-19 event continues to pose multiple challenges for participants operating in an array of industrial sectors. As the IoT space continues to evolve, stakeholders in the current IoT operating systems market are increasingly focusing on tapping onto opportunities within the healthcare sector. The overburdened global healthcare systems continue to find different ways to streamline processes. A surge in the IoT healthcare applications such as telehealth consultations, remote patient monitoring, robot assistance, and digital diagnostics amid the COVID-19 pandemic is expected to provide considerable business for market players operating in the IoT operating systems market landscape. While the demand from the healthcare sector is projected to gain considerable momentum due to the COVID-19 health crisis, adoption in other industrial sectors is likely to gain pace in phases over the next few years.

As more number of companies continue to prioritize augmenting the efficiency and productivity levels of their logistics and supply chain models, high demand for IoT operating systems to develop these solutions can be expected.

The Cost of Installing Air Conditioning in the UK