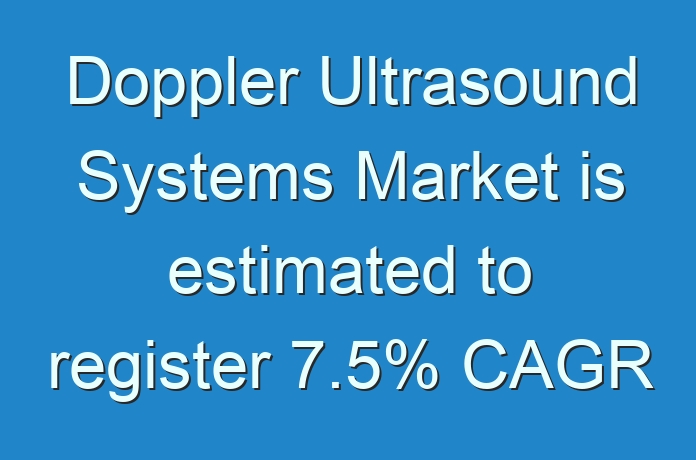 The global doppler ultrasound systems market was valued at approximately US$ 1.3 Bn in 2017. It is projected to expand at a compound annual growth rate (CAGR) of more than 7.5% from 2018 to 2026, according to a new report published by Transparency Market Research (TMR) titled ‘Doppler Ultrasound Systems Market – Global Industry Analysis, Size, Share, Growth, Trends, and Forecast, 2018–2026’. Expansion of the health care industry, increase in government initiatives, rise in health care expenditure and product approvals, and increase in patient population are projected to augment the global market from 2018 to 2026. North America and Europe are likely to account for a dominant share of the global Doppler ultrasound systems market, owing to the presence of key players in these developed regions as well as high rate of adoption of technologically advanced Doppler ultrasound systems in these regions. Development of health care infrastructure and high medical expenditure by governments in emerging economies, such as China and India, are likely to boost the Doppler ultrasound systems market in Asia Pacific at a CAGR of 8.8% from 2018 to 2026.

Rise in incidences of target diseases to propel market

Growth in emerging economies and rise in per capita income

Countries in Asia Pacific, such as China, Japan, and India, offer significant opportunity to the Doppler ultrasound systems market. China is estimated to be a prominent market for Doppler ultrasound systems after Japan, which accounts for a notable share of the market in Asia Pacific. The region consists of developing countries that require low priced diagnostic technologies to progress and offer citizens basic medical facilities. Economies in the region are expanding significantly; however, they still have to adapt to the digitization of Doppler ultrasound technologies.