The condoms market in China features a high level of consolidation, with the top three companies accounting for over 70% share in the overall market in 2015, states Transparency Market Research (TMR) in a recent report. These three companies, Reckitt Benckiser Group plc, Ansell Ltd., and Church and Dwight Co., command a prominent position in the overall growth dynamics of the China condoms market, giving a tough competition to local manufacturers.

To strengthen their position in the market amid the intense level of competition, companies such as Reckitt Benckiser Group plc have resorted to the development of innovative products and newer ways of marketing to knock off the threat of counterfeit products and high advertisement and distribution costs. The company shifted to an all-digital and all social strategy post 2010, which helped the company to increase its share in the overall market from 30% in 2010 to 45.6% by 2015.

Planning to lay down future strategy? Perfect your plan with our report sample here https://www.transparencymarketresearch.com/sample/sample.php?flag=S&rep_id=13898 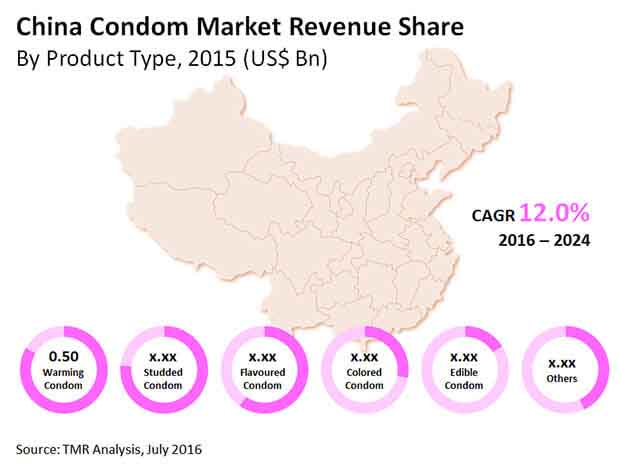 Condoms have gained an increased level of acceptance in China after the government actively started endorsing condoms as an effective way of preventing sexually transmitted diseases such as HIV/AIDS and Chlamydia. Prior to 2002, condoms were endorsed by the government as a hygiene concept, leading to a marketplace with narrow growth opportunities. With rise in active initiatives by the government aimed at educating the masses about the importance of safe sex, the sales of condoms have substantially increased.

Apart from this factor, the improving quality of lifestyles, driven by a strengthening economy, and the rising know-how about safer ways of preventing contraception and sexually transmitted diseases have also worked substantially in favor of the country’s condom’s market. Sales of a variety of condoms have also increased in the country owing to factors such as the rising popularity of female condoms, rise in the country’s sexually active demographic, and increase in usage of homosexual condoms.

Ever since the announcement that China had ended the one child policy was made at the beginning of 2015, manufacturers of condoms had been dreading reduction in the overall sales of condoms in the country. The fears did not turn out to be insignificant and key vendors operating in the China condoms market started witnessing a slump in demand. By the end of 2015, Okamoto Industries saw a dip in its market share by 24%, Female Health witnessed a decline of 19% and shares of Church and Dwight dropped by 3%.

Though the present-day impact of this factor is tremendous on the market, the trend is expected to have a low impact on the overall condoms market in the long-run. Analysis estimates that the awareness regarding protective properties of condoms will work more in favor of the China condom market in the long run than how the end of the one-child-policy is negatively impacting sales currently.

TMR analysts suggest that strategies such as product innovations and adhering to innovative ways of reaching the consumer, along with marketing gimmicks that could keep educating a larger consumer base about the preventive health benefits of using condoms will help condom companies gain more sustainable growth opportunities in China.

The China condom market is expected to expand at a 12% CAGR from 2016 through 2024 in terms of revenue, rising from a valuation of US$1.84 bn in 2015 to US$5.04 bn by 2024. In terms of volume, the market is expected to expand at an 8.1% CAGR over the said period. The product variety of warming condoms is presently the leading contributor to the China condoms market’s overall revenues, accounting for a share of over 31% in 2015. In terms of material, latex condoms accounted for over 50% in market’s revenues in 2015.

For this study, the China condom market has been segmented as follows:

China Condom Market, by End Use