A building-integrated photovoltaic (BIPV) system is an integral component of the building skin that converts solar energy into electricity and, simultaneously, provides protection from climatic conditions as well as noise to the building structure. BIPV is currently one of the rapidly expanding segments of the global solar PV industry.

In order to address challenges associated with climate change, major regions across the world are developing policies to move toward ultra-low-energy buildings. The European Union (EU) Energy Performance of Buildings Directive (EPBD) requires all new buildings to be nearly-zero-energy buildings (nZEB) in all EU member countries by the end of 2020. Outside of Europe, the U.S., Japan, and South Korea have also formulated ZEB policies and set goals. Certain leading subnational governments, most notably the U.S. States of California and Massachusetts in the U.S., have set ambitious ZEB targets. For example, the State of California has set the ambitious goal that “all new residential buildings in the state would be zero net energy (ZNE) by 2020 and all new commercial buildings would be ZNE by 2030.” Japan has established targets for ZNE in new public buildings by 2020 and all newly constructed buildings by 2030. In 2014, South Korea formulated the “Activation Plan of Zero Energy Buildings” and set a roadmap to achieve targets along with a financing strategy and subsidies for pilot projects. Such supportive policies are driving the global building-integrated photovoltaics market. 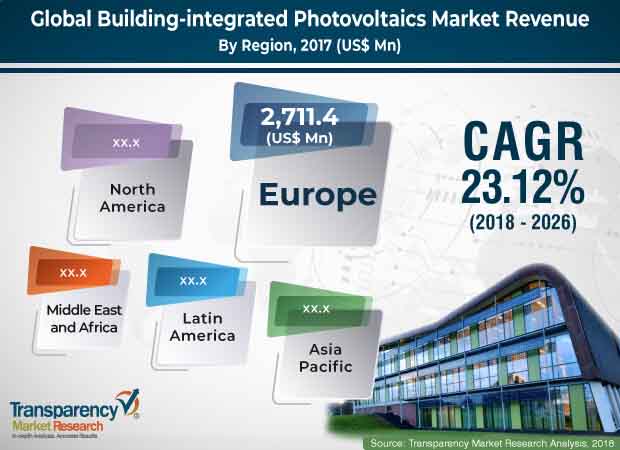 Higher cost of BIPV systems and lack of awareness

Use of the BIPV (building-integrated photovoltaic) technology converts buildings from energy consumers into energy producers. In order to achieve this, the construction technology is required to be merged with the BIPV technology. The photovoltaic (PV) technology is new and expensive for curtain walls and other aspects of buildings. Moreover, lack of awareness about and inadequate marketing of BIPV products in Vietnam, the Philippines, and certain countries in Africa are likely to hamper the building-integrated photovoltaics market in these countries during the forecast period.

Surge in demand for electricity

Surge in population across the globe, growth of the industrial sector, and rise in infrastructure development activities are boosting the demand for electricity. Electricity has enabled functions such as transportation, industrial activities, and services. Demand for energy is increasing, due to economic growth of countries and rise in the standards of living. Countries across the world are increasing their electricity generation capacity by establishing new plants or by increasing the capacity of the existing plants to cater to the rising demand for electricity. Due to stringent government regulations regarding greenhouse gas (GHG) emissions, companies are focusing on developing low-cost sources for generation of renewable energy. Rapid growth of the construction sector is projected to create opportunities for companies to invest in the global BIPV market in the near future. According to the International Energy Outlook–2017, total energy consumption in the world is expected to increase from 575 quadrillion British thermal units (BTUs) in 2015 to 736 quadrillion BTUs by 2040, which is an increase of 28%.

Developments in terms of expansion, acquisitions, and new contracts in building-integrated photovoltaics market

In September 2017 itself, Onyx Solar Group LLC installed transparent photovoltaic glass at Brunel University in Uxbridge, West London (the U.K.). The glass was installed in the curtain wall of the university’s Wilfred Brown Building. The building features 42 units of PV glass of different sizes, some of which are 2.6 meters in width. This project is a part of remodeling of the 4,710-square-meter building. In June 2017, Hermans Techniglaz BV was commissioned to supply tailor-made PowerGlaz BIPV solar panels to the town hall of Albrandswaard, Poortugaal (the Netherlands). The town hall was being renovated and sustainably improved. In June 2017, Hermans Techniglaz BV commissioned to supply PowerGlaz BIPV solar panels for the construction of Vakcollege Tilburg, a school in the Netherlands. These semi-transparent solar panels were installed in skylights of this school. In May 2016, ViaSolis won a contract for supply of PV modules to cover a roof in California (the U.S.) for one of the world’s largest corporations. In January 2015, ViaSolis glass or glass PV modules received the first certification from Electrosuisse, Switzerland’s main certification body, for their design and safety. It was the first certification granted to any PV module by Switzerland’s quality trademark. Qualification tests were conducted by SUPSI, the Swiss PV Module Test Center. In November 2014, ViaSolis started production of framed glass/glass modules. Compared to frameless modules, framed modules are easier to carry and they do not require any exceptional care during handling.

Request for Custom Research at – https://www.transparencymarketresearch.com/sample/sample.php?flag=CR&rep_id=454

Europe dominated the global building-integrated photovoltaics market in 2017. Increasing government incentives, renewable energy targets, and rising investments in the solar technology in the region are expected to drive the building-integrated photovoltaics market in Europe during the forecast period. Moreover, the market in Asia Pacific is expected to expand at a rapid pace during the forecast period. Rapid growth of residential and commercial construction sectors in Asia Pacific is boosting the market in the region. BIPVs can add unique visual elegance and architectural beauty to a building in addition to saving electricity costs and increasing the overall efficiency. Thus, the demand for BIPV products is anticipated to increase in the near future.

4 Things you need to know about Machine Vision Technology