We live in an era where our lives are highly dependent on automobiles. This essentially calls for the need to enhance the safety infrastructure in automobiles, considering the rising number of vehicle users across the world. Road traffic injury is currently the leading cause of deaths among children and young adults. With seat belts being an essential aspect of road safety, governments across the world have mandated their use. However, despite these regulations, many individuals refrain from using seat belts, considering it an inconvenience. This notion is gradually changing with the shift in consumer perspective from ‘convenience’ to ‘safety’, boosting the growth opportunities for the automotive seat belt retractor market. The automotive seat belt retractor market also derives its strength from aftermarket sales, as consumers are keen on replacing old and defective parts of seat belts.

However, the development of vehicles with advanced safety measures may lead to ignorance in the use of seat belts. This essentially means that, although ‘quantity’ may drive growth, it is ‘quality’ that will drive consumer attention. That being said, manufacturers are cashing in on this opportunity by developing new technologies and working on enhancing overall user experience. Assessing the rise in lucrative opportunities for the automotive seat belt retractor market, due to incessant expansion in the automotive industry and stringent government laws, TMR conducted an extensive analysis on the market. In its latest study, TMR talks about how changes in consumer preferences and rising innovations impact the business strategies deployed by key enterprises in this market space. 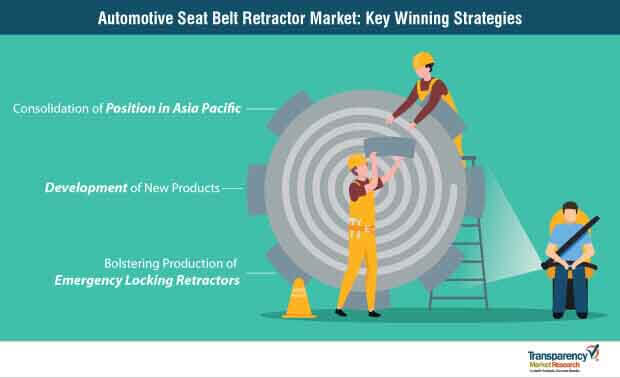 The automotive seat belt retractor market has come a long way since the discovery of retractable seat belts in late 1955. Seat belt retractors were introduced when conventional seat belts no longer sufficed the need for safety. The need for enhanced safety drove the way for innovations, aimed at enhancing the safety aspect and comfort for the occupants. New seat belt retractor technologies have been evolving ever since, with the development of TRW’s next-generation SPR4 ‘snake pretensioner’ in 2013, to the introduction of ZF Friedrichshafen AG’s active control retractor in 2018. The market is graduating towards success in conjunction with the increase in the production of vehicles. Market sales volume for automotive seat belt retractors was 426 Mn units in 2018, and the market is projected to rise at a CAGR of ~ 3% during the forecast period.

Consolidation of Position in Asia Pacific

Asia Pacific has emerged as a lucrative region for the growth of the automotive seat belt retractor market, with the rising sales of premium and luxury vehicles. Additionally, the high production volumes of vehicles in developing countries such as China, India, and Japan have created avenues of growth for the automotive seat belt retractor market. Sensing the market potential in this region, manufacturers are working towards enhancing their presence in Asia Pacific. Players are also strengthening their ties with the foreign automakers entering these regions in order to increase proliferation in Asia Pacific. India, in particular, is a key region for the market’s growth, owing to government policies such as ‘Make in India’ offering incentives to global players to establish manufacturing facilities in India.

The automotive industry is prospering in many developing countries, owing to the rising population and the emergence of electronic vehicles. Moreover, stringent laws pertaining to the use of seat belts promote aftermarket sales for automotive seat belt retractors in these regions. Also, scarcity of manufacturers in these regions reduces the risk of competition. Sensing these opportunities, manufacturers are leveraging the growth potential of these countries, either by setting up new manufacturing units or building alliances with automakers in these countries.

New Product Development to Pave the Way for Growth

The automotive seat belt retractor market is driven by new innovations and technologies. Key players are engaging in research and development activities to come up with solutions that not only offer enhanced safety, but are also economically viable. Players are sensing the consumer behavior and new trends in the market, and are launching products aligned with the current market scenario. For instance, ZF Friedrichshafen AG developed a control retractor for the seat belt system which is light in weight, compact, and assembled with new software functions. Similarly, DENSO CORPORATION developed a seat belt electronic control unit that tightens to hold occupants in place during a collision.

Analysis of the Competitive Landscape

Product differentiation and creating a brand identity remain the preferred growth strategies among players in the automotive seat belt retractor market. Apart from this, market players rely on mergers and acquisitions, expansion of production units, and penetration in regional markets to gain an upper-hand in this market space.

Buyers in the market hold immense bargaining power, owing to the presence of a large number of established players with diverse portfolios and technologies. The intensity of competition among suppliers has increased, due to the soaring production of vehicles. However, the demand for advanced systems such as active seat belts is likely to enhance their bargaining power. There is a moderate threat of new entrants, as the incumbents have already established a brand identity in specific regions. New entrants can gain access to the market due to low initial investments that are required.

The global automotive seat belts retractor market has been segmented based on technology, seat, vehicle, and region.

Based on seat, the rear seats segment is likely to account for a prominent share of the automotive seat belt retractor market, as the volume of seat belts required is higher in rear seats, owing to various types of vehicles considered in the research, which have a higher number of occupancy space for rear seats, such as SUVs and MPVs. Occupants on the front seats have relatively more space and a little more time for the locking of retractors, as compared to rear seats, during an impact or collision. Several other safety features or equipment are installed or fitted in the front portions of vehicles, rather than the rear seats, even in base segment vehicles.

Autoliv, Inc. and ZF Friedrichshafen AG are at the forefront in the development of seat belt systems and retractors, and hold a major share of the global automotive seat belt retractor market. In 2018, ZF Friedrichshafen AG introduced an active control retractor that works in conjunction with an autonomous emergency braking system. The system can be an integral part of automated driving systems. In 2014, TRW introduced TRW FS1, approximately 15% lighter than the previous technology owing to its simple construction; it was also cost-competitive.

He who has never denied himself for the sake of giving

Financial Decisions that Young Adults Can Make For Their Future