With the depletion of the ozone layer mounting sustainability concerns, the significance of hydrofluorocarbons is projected to shrink, reflecting on the poor growth prospects of trichloroethylene and perchloroethylene market. In contrast to Western markets, developing countries will hold on to their lucrativeness, and will remain key market for maximizing gains out of inorganic growth strategies, during the forecast period of 2019-2027. 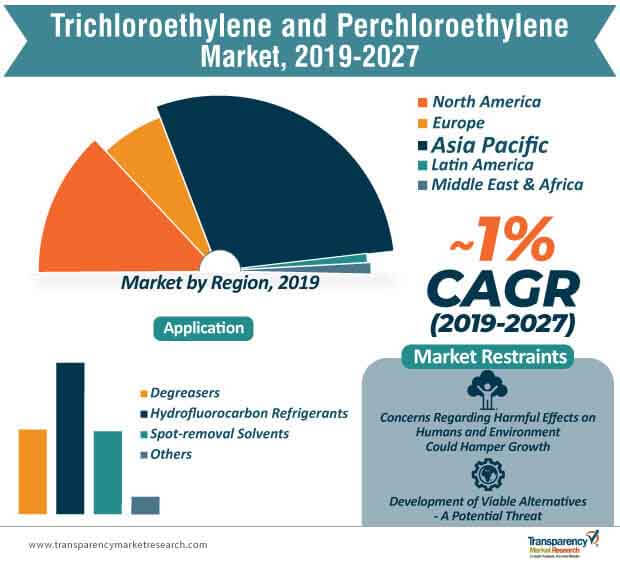 As soon as information regarding the toxic profiles of trichloroethylene and perchloroethylene, along with their carcinogenicity, began coming to light, federal agencies and organizations started legislating regulations to limit the exposure of these chemicals. The Environmental Protection Agency (EPA) took into consideration the liver problems and increased risk of cancer among humans from the long-term exposure of trichloroethylene, and set a zero contaminant level goal as a primary standard for drinking water.

In addition, the Occupational Safety and Health Administration (OSHA) fixed a permissible limit of 100 ppm for trichloroethylene for an 8-hour working day, and an exposure of 300 ppm for a maximum duration ranging from 5 minutes to 2 hours. The influence of these stringent regulations has been levying a negative impact on the sales of trichloroethylene and perchloroethylene, which has widened the window for the penetration of substitutes.

Among other substitutes, Cold Plus, Soy Gold 2500, and Dipropylene Glycol  Monomethyl Ether (DPM) are found to perform better due to their low-VOC and low-toxicity levels, which is projected to reduce trichloroethylene and perchloroethylene to merely chemicals with toxic profiles.

Given the strength of regulations and increasing popularity of substitutes, the trichloroethylene and perchloroethylene market cannot be declared dead, but can be deemed as a negatively-growing landscape in developed countries.

Based on grade, perchloroethylene (PCE) will continue to grow in terms of value at a CAGR of ~1% during 2019-2027. The growth in demand for perchloroethylene is attributable to dry cleaning, vapor-degreasing, and other technical and industrial applications. While one-fourth of PCE supply is consumed for the production of chlorofluorocarbon, its popularity as a solvent has been driving sales in the paint and coating industry. However, the sales of trichloroethylene are projected to witness exponential growth with key applications of the chemical in vapor-degreasing, chemical synthesis, and cold cleaning.

In the developed countries of North America, trichloroethylene is generally imported, on account of the availability of inexpensive imports from developing countries of Asia Pacific, which has significantly decreased its production in the region. However, this decrease in production hasn’t prevented the use of imported trichloroethylene as a cold cleaning agent in numerous industrial processes such as electronics, automobiles, furniture, and plumbing fixtures, in North America.

Thoracic Drainage Devices Market projected to expand at a CAGR of ~5% from 2019...

Orthopedic Navigation Systems Market Estimated to Cross US$ 472.5 Mn By 2031