Alternators have become an integral part of several industries due to their ability to convert mechanical energy or direct current (DC) to alternating current (AC). They consist of multiple poles and come with varying rotation speeds, both of which determine its output frequency. Alternators are being extensively used in several industrial verticals, such as automotive, power generation, and mining, apart from having commercial and residential applications. Analysts anticipate that the opportunity in the global alternators market is expected to be worth US$ 32.5 bn by the end of 2027 as compared to US$ 22.8 bn in 2018. Between the forecast years of 2019 and 2027, the global alternators market is expected to progress at a CAGR of 4.0%. 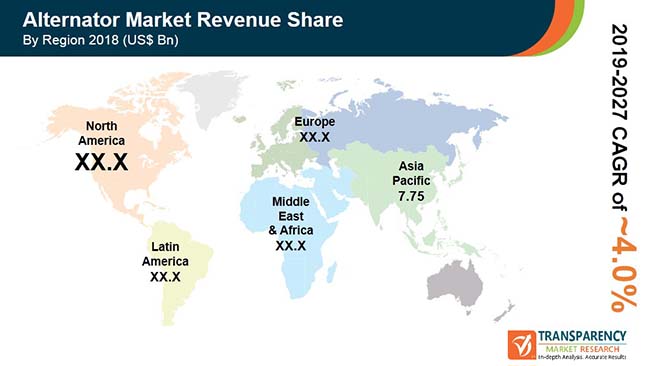 Request a sample to get extensive insights into the Alternators Market

The rise of the automotive sector the majority of the emerging economies is the primary growth driver for the alternators market. Emerging economies such as China, India, South Africa, Mexico, Taiwan, and Indonesia are undergoing a massive transformation and are on the cusp of being major manufacturers of automobiles for the next few years. Citing this trend, the uptake of alternators is likely to remain high in these countries. The demand for alternators across the globe is also likely to be complemented by the 3% rise in the sales of automobiles across the globe as compared to 2017.

The market is also expected to benefit from the soaring demand for power in recent years. Rising investments in the construction industry and the industrial infrastructure sectors, especially in the upcoming economies, has generated lucrative opportunities for alternators. The burgeoning utility sector and the relentless rise in the overall population have also played a crucial part in the direct and indirect rise in demand for alternators. The strict regulatory framework designed to protect the environment has also created a demand for unconventional sources of power generation such as tapping tidal energy and using windmills. Alternators are also being used for these purposes.

Application of alternators is seen in industries such as the oil and gas, marine, power plant, stand-by power, mining among others. The report states that the stand-by power industry was the leading segment in 2018. This segment is expected to show its unwavering dominance in the coming years due to increasing demand for stand-by power equipment that requires alternators, in commercial & residential buildings, telecommunication towers, and other industries.

In terms of geography, the global alternators market has been segmented into North America, Europe, Asia Pacific (APAC), South America and Middle-East & Africa (MEA). Though North America held a dominant position in the market in 2015, Asia Pacific is expected to dominate in the coming years. The shift in regional dominance will be due to remarkable growth of the automotive industry in countries such as South Korea and India among others emerging economies of the region. Furthermore, the emergence of several industrial sectors in these countries is also expected to create a demand for alternators in the coming years. The foreseeable economic development and growth of sectors such as telecommunication and railways industry will prove to be instrumental to the dominance of Asia Pacific in the coming years.