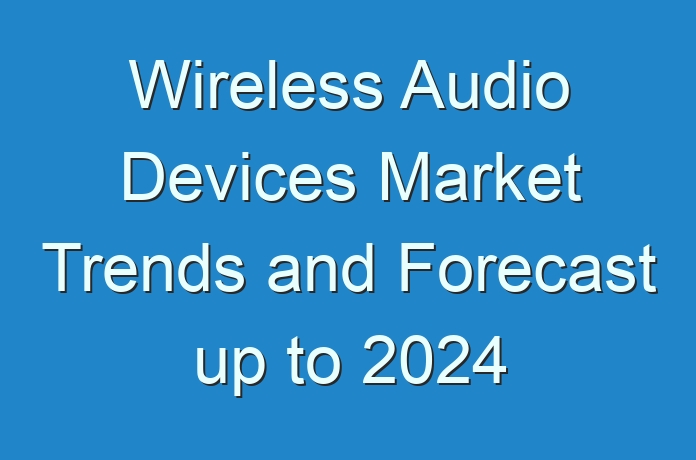 The leading companies in the global market are focusing on innovation and design to attract new consumers. Recently, Bose, one of the leading brands in the global wireless audio devices market launched a product called Sound Frames. The product is a polarized eyewear with a high quality Bluetooth speakers installed at the rear, which fits perfectly over the ear. The sound quality is high end and people have taken to the product instantly.

Such innovations are key for setting up a loyal consumer base for the leading companies in the global market. Emerging economies such as India and China are experiencing a huge growth in terms of smartphone sales. This along with increasing penetration of internet is expected to pave way for more personalized content consumption. This will have a direct impact on the overall development and growth of the global wireless audio devices market.

Behavioral shifts among consumers in the audio industry have been highly influenced by the growing penetration of smart phones and tablets. This, combined with the changing preference in media consumption toward streaming services such as Deezer, Pandora, and Spotify, will boost the prospects of the global wireless audio devices market at a CAGR of 1.5% between 2014 and 2024, finds Transparency Market Research (TMR).

Wireless audio devices enable access to huge personal libraries of songs for listeners to enjoy at home or on the go. The advent of this technology has not only steered paradigm shift in consumer preference but has also catapulted wireless and portable MP3 players at the forefront of the music and entertainment industry.

Besides this, latest innovations in the wireless audio technology have caused a major shift in music storing and music streaming technologies. The launch of smartphones, tablets, and other smart devices in-built with high-tech players has replaced dedicated MP3s, thus resulting in a sharp decline in their average sales.

The purchase decision of any customer is not only influenced by the audio performance of a wireless audio device. Manufacturers are therefore required to focus on bringing both audio features and ergonomics of devices at an equilibrium to positively influence a consumer’s buying decision. Taking cue from the changing consumer preferences, Clip+ and Micro were launched by JBL and Divoom launched Bluetune Bean that provide additional features alongside exceptional music streaming features.

Gaining from the demand for increasing functionality and better aesthetics, the global wireless audio devices market is poised to reach US$10.12 bn by 2024, from US$9.04 bn in 2014, states Transparency Market Research. 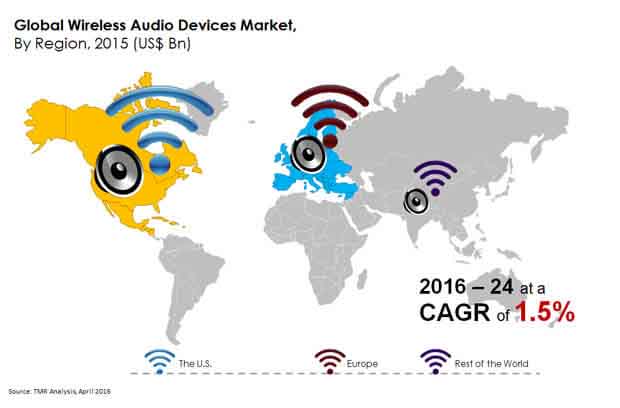 U.S. and Europe Identified as Most Lucrative Markets for Wireless Audio Devices

The U.S. and Europe have been exhibiting the most lucrative prospects for the global wireless audio devices market. The growth of digital music has been unprecedented in the U.S. Compelled by the prevailing dynamics, vendors in the U.S. wireless audio devices market are revamping the products they offer to tap into the digital music sources. Prominent suppliers in the market have already added home network technology to their products such as AV receivers, tabletop stereo systems, tabletop radios, home-theater-in-a-box systems, and others. The new technology allows these devices to stream music from networked PC via Wi-Fi.

The U.S. has always been the earliest adopter of any novel technology, thus providing comparatively better opportunities for the large-scale deployment of wireless audio devices. In Europe the market will gain from the increasing demand for smart homes. The wireless audio devices market in Europe is likely to surge at a moderate pace during the forecast period.

Key Players Vying to Capitalize on Opportunities in Emerging Economies

Enterprises operating in the global wireless audio devices market are increasingly focusing on expanding their reach in emerging economies such as India and China, considering the robust demand witnessed in these nations. Apart from this, product innovation and differentiation are also looked upon as viable strategies for attracting positive consumer response. This trend led to the launch of streaming protocol service called “Google Cast” by Google in 2015. Next in line was LG Electronics Inc., who announced the launch of novel sound bars and multirooms in 2016.

Will Managed File Transfer have a good future? What is the annual growth rate?