Knnit
Home News Wavefront Sensor Market is expected to cross the value mark of US$... 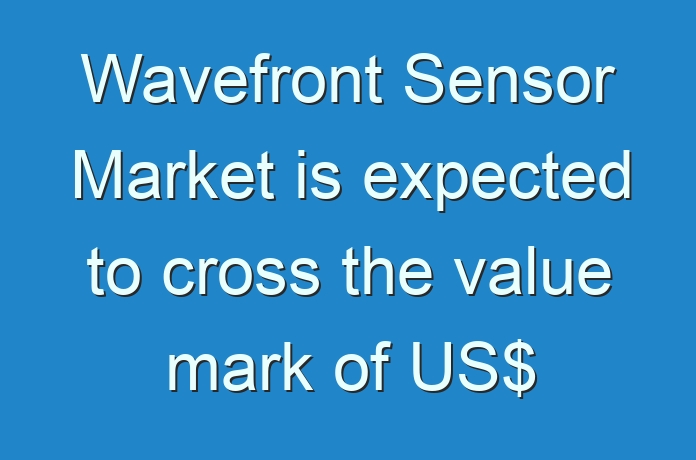 A wavefront sensor is a device used for measuring the aberrations of an optical wavefront. Wavefront sensors are used in consumer, biomedical, military & defense, and industrial & manufacturing end-use industries, and in communication fields to measure the wavefront distortion in camera lenses, head-mounted displays, 3D printing, and free-space optical communication, among others. Wavefront sensors are largely used in biomedical microscopy to diagnose individual cells accurately. Thus, the demand for wavefront sensors is projected to rise across the globe in the near future with the growing trend of making novel biomedical microscopes and camera lenses to perform operations precisely, quickly, and safely. The adoption of technologically advanced, accurate wavefront sensors has increased in the military & defense sector with the introduction of new technologies and innovations, thereby creating lucrative opportunities for the global wavefront sensor market.

The use of wavefront sensors in medical microscopy plays a vital role in scientific research studies in multiple universities across the globe. For instance, a team of scientists at the Hong Kong University of Science and Technology developed an adaptive optics two-photon excitation fluorescence microscopy for high-resolution in vivo fluorescence imaging of mouse retina by using direct wavefront sensing.

Fluorescence microscopy is useful to study the properties of organic or inorganic substances accurately and effectively. Thus, adoption of wavefront sensors in biomedical microscopy is significantly high, which is expected to drive the global wavefront sensor market during the forecast period.

In recent decades, the semiconductor industry has undergone multiple changes; among these, miniaturization in semiconductor technology has made a significant contribution to the success of modern electronics in many fields. Digital Light Processing (DLP) is a 3D printing process, and a type of vat polymerization where a projector is used to cure photopolymer resin. DLP 3D printers have faster build speeds due to a single layer being created in one singular digital image. In September 2018, Sprybuild, a Ukrainian 3D printing startup developed and filed a patent for a new continuous DLP 3D printing technology called CPWC (Continuous Production with Wavefront Converting), which is used to build the fastest DLP 3D printers in the world. Thus, rise in the use of faster build speed DLP 3D printers has spurred the demand for wavefront sensors, which is expected to bolster the growth of the market during the forecast period.

Orthopedic Orthotics Market is expected to reach US$ 5.5 billion revenue by 2026

What is the projected market size & growth rate of the Media Tablets Market?