The introduction of new algorithm systems is generating curiosity among marine life researchers and the marine life scientific community. Hence, companies are increasing R&D in cameras that provide images with its true colors to help marine life researchers’ gain a lot more worth out of current data sets. They are increasing their efficacy in theoretical and experimental research work. Companies in the underwater camera market are growing increasingly aware that light behaves differently in water, which has led to innovations of new algorithms and cameras. 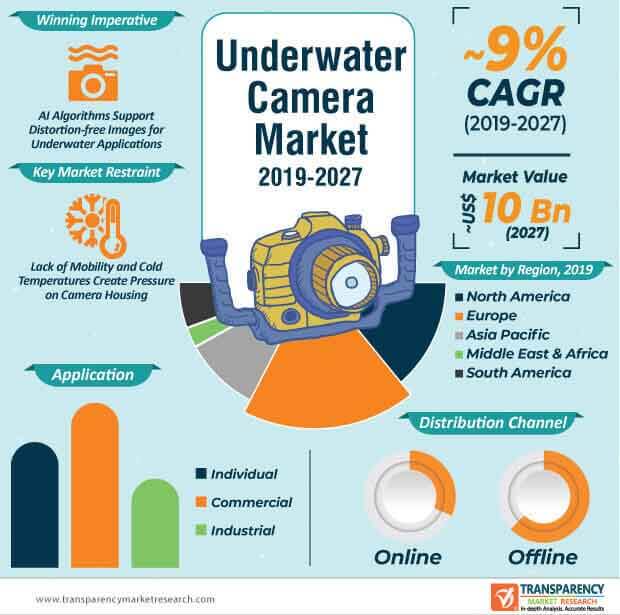 Request a sample to get extensive insights into the Underwater Camera Market?

Apart from commercial and individual applications, manufacturers are tapping opportunities in military and aerospace electronics to generate new revenue streams. This is evident since the underwater camera market is estimated to reach a value of ~US$ 10 Bn by the end of 2027. Hence, companies are increasing their production capabilities to develop underwater laser 3D cameras that are capable of mapping seabed and detect marine pollution. The novel camera’s advantages are benefitting end users who can monitor fish stocks.

As a part of the € 5.7 Mn “UTOFIA” project, researchers and innovators are participating in Europe’s Horizon 2023 innovation program, to address the requirements in maritime applications. This is well justified since Europe is expected to lead the underwater camera market. Manufacturers in the market for underwater cameras are increasing their efficacy in innovative technologies that align with low-visibility environments. The underwater camera market is transforming, since companies are increasing efforts to solve the problem of backscatter caused by the reflection of light due to suspended particles in the water.

The underwater camera market is expected to grow at a CAGR of ~9% during the forecast period. Rise of marine life tourism and emergence of new broadcasting channels are contributing toward the growth of the market. However, companies are limited by lack of mobility and depleting battery life of underwater cameras, owing to cold temperatures in deep depths of water. Hence, biologists are tying up with small-scale companies that are capable of providing adequate camera and light set up. Hence, companies should partner with idea-driven startups to construct rigs from galvanized stainless steel that solve the issue of mobility underwater.

There is a growing demand for underwater cameras that facilitate underwater observation without getting wet. Hence, manufacturers in the underwater camera market are increasing their efficacy in technologies that improve the interpretation of sonar for sea anglers. For instance, Aqua-Vu-a provider of innovative underwater devices, has introduced the Aqua-Vu technology, which helps in the discovery of fish hidden in the vegetative state.