Rice Husk Ash (RHA) is a product obtained from burning rice husk or hull. Rice husk is an ideal source for electricity generation which is used in different industries. Rice husk is around 20% of the paddy and 25% of the husk is the ash obtained after burning rice husk. The RHA contains high content of silica. The global rice husk ash market stood at US$ 1.06 Bn and is expected to grow at a CAGR of 5% in terms of value to reach US$ 1.64 Bn by 2025. RHA is commercially available different forms such as nodule, granule and powder.

Based on the temperature used for energy generation, nodules and granules of RHA is obtained. Nodules and granules of RHA is further processed to form powder form of RHA.  Nodule form of RHA occupies the major market share with more than 40% share globally, followed by granules and powder. Powder form of RHA is the most expensive one. Though, powder RHA is a very high-grade product, its transportation may result in loss of ash by ~20%, whereas granule and nodule forms do not cause a loss. Also, the handling of powder RHA is prone to cause environmental pollution. 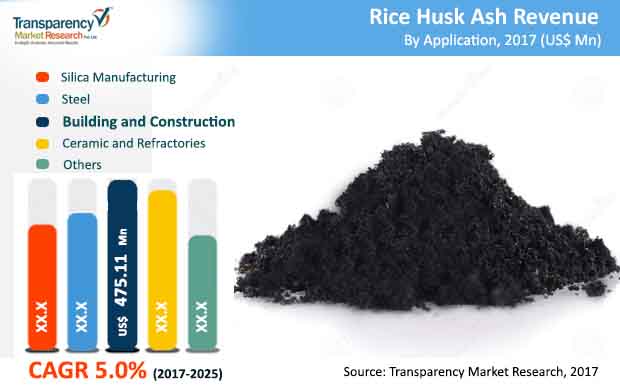 RHA is used in several applications due to its unique properties. However, not all the RHA, is used at a commercial scale due to lack of awareness. Less than half of the available RHA is utilized by the end users and remaining is either discarded or used domestically for household purposes. RHA is used in different applications such as building & construction, steel, ceramic & refractory, silica manufacturing, and others. Use of RHA in building & construction industry dominates the market with more than 40% in terms of applications. In cement industry, RHA is used for its amorphous silica to manufacture concrete. Here, RHA is used as a substitute for ordinary Portland cement (OPC), which is the most expensive component of concrete. Use of RHA helps in producing low cost building blocks. Low-cost building blocks is preferred in under-developed countries such as Kenya, Nigeria, etc. Also, RHA is used in production of high strength concrete by replacing silica fume, which is the commonly used mineral admixture. RHA to be used in powder form as an admixture in concrete.