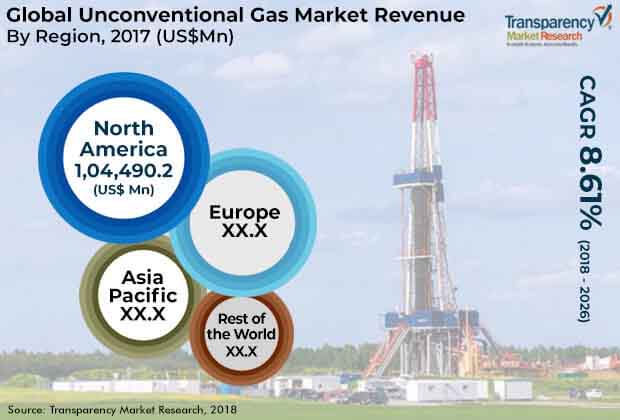 Hydraulic fracturing technology is largely used for the production of unconventional gas. Hydraulic fracturing is a process of injecting chemicals, water, and sand at extremely high pressure into gas wells in order to fracture rocks and release methane gas, The process takes place over two to five days, and requires an average of 5.5 million gallons of fluid. It may be repeated multiple times on the same well over the course of the potential 25 to 40 year lifetime. Many of these chemicals are toxic and are known to cause adverse health effects. Many of the chemicals used in hydraulic fracturing can cause eye, skin, and respiratory problems, and can also affect the brain, nervous system, and gastrointestinal system. This is expected to hamper the unconventional gas market.

Growth in Penetration of Natural Gas in Transportation and Domestic Sectors

Applications in the natural gas industry have been expanding significantly. Natural gas is being increasingly used as an energy fuel in transportation and domestic, i.e. residential and commercial, sectors. The transportation sector has boosted the natural gas market, with rise in deployment of CNG vehicles. More than 24 million natural gas vehicles (NGVs) were operational across the globe in 2017. Natural gas can be used in all classes of vehicles such as motorcycles, cars, vans, light and heavy duty trucks, buses, lift trucks, and locomotives. This trend is expected to continue during the forecast period, thereby propelling the unconventional gas market.

In December 2017, TechnipFMC plc. launched the Surface International Facility Center in Abu Dhabi, the UAE. The company aims to provide solutions and services to the Abu Dhabi National Oil Company (ADNOC) and other companies. The center is expected to strengthen the business outlook of TechnipFMC plc. in the Middle East. In October 2017, TechnipFMC plc. announced plans to enter into an agreement with Plexus Holding plc. to acquire the latter’s wellhead exploration equipment and services business for jack-up applications. The acquisition is anticipated to further extend and strengthen TechnipFMC plc.’s position in exploration-drilling products and services. In June 2017, Total S.A. acquired an additional 75% interest in the Barnett shale in the U.S. Through this move, the company aims to expand business in North America. In June 2016, Det norske oljeselskap ASA (Det norske) entered into an agreement with BP p.l.c. to establish an independent offshore E&P company. The company is expected to be named Aker BP ASA (Aker BP) and would be headquartered at Fornebuporten, Norway, with Aker ASA (Aker) and BP as main industrial shareholders. In March 2016, BP Plc. and China National Petroleum Corporation (CNPC) signed a production-sharing contract for shale gas exploration, development, and production in the Neijiang-Dazu block in the Sichuan Basin, China.