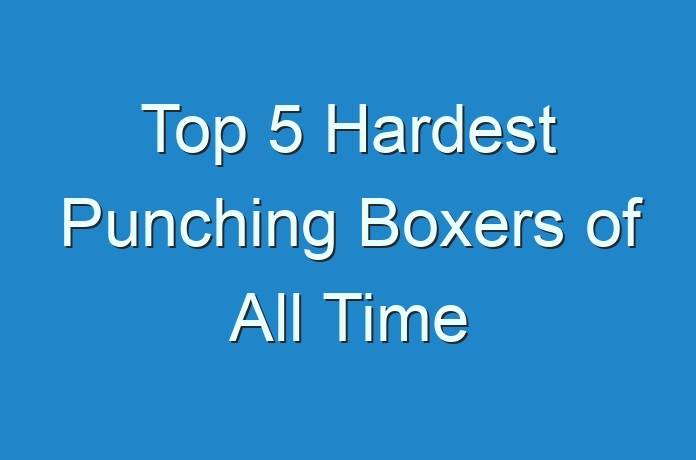 Boxing has been one of the famous sports all around the world. One of the most important factors in deciding the hardest punchers of all time is their Knockout percentages. Here, we run down on the list of top 5 greatest boxers of all time based on the reputation and results of their powerful punch. 5. Wladimir Klitschko: Widely called as ‘Mr. Steelhammer’ Klitschko’s punching power in among one of the best in the world. His jab at the opponent is what makes him so popular. He is an expert in turning the jab to the opponent at the last second and then makes it look like a sweeping hook, which completely stuns the opponent. One weakness in his game was his vulnerable chin, which made him avoid the risks that other boxers may have taken.

4. Sonny Liston: Sonny Liston was the famous boxer in the time of 1960s. Liston was among the most destructive punchers the world of boxing has ever seen. Apart from that, he became the World Heavyweight Champion in the year 1962 and successfully completed his title defence in the following year. Being 6 feet tall and with heavy and muscular body Liston could reach up to 7 feet in giving hardest punches to his opponent. His agility in the ring speaks for itself. According to many people in his time, he is widely regarded as one of the top three heavyweights of all time. 3. Mike Tyson: The list about the hardest punchers of all time can never be given justice if the name of Mike Tyson is not in it. Mike Tyson was the youngest heavyweight champion in the world in 1986. He was popularly called as ‘Iron Mike’ by the people. His dexterity and range inside the boxing are one of its kind. Being so muscular, people never believed that he would be so quick. That is why he was able to deliver one of the best Knockout and hardest punches. He was one of the fighters in this list from which other boxing fraternity was clearly intimidated, which makes him a class apart above everyone else. 2. Joe Louis: Regarded as one of the greatest punchers of all time if not the greatest Joe was an opponent who was feared by his nemesis. His title defences are the longest in history as compared to any other boxer. He was a boxing guru in the era of the 1930s and 1940s, and his match with Max Schmeling was regarded is the ‘Fight of the century’ by many as he was able to take revenge for his earlier loss to him. 1. Earnie Shavers: Being in the era of the 1980s, the punching power of Earnie was unmatched. Thirty-three of the victories of Shavers came just in two rounds. These results speak for themselves as to how much power the punches of Shavers generated. The opponents were completely stunned and demoralised by the power of Shavers. Many other famous boxers like Muhammad Ali have also attributed Shavers as one of the hardest punchers they have ever confronted in their lives.