Home News To Which Country Should the Origin Be Traced, Indeed? 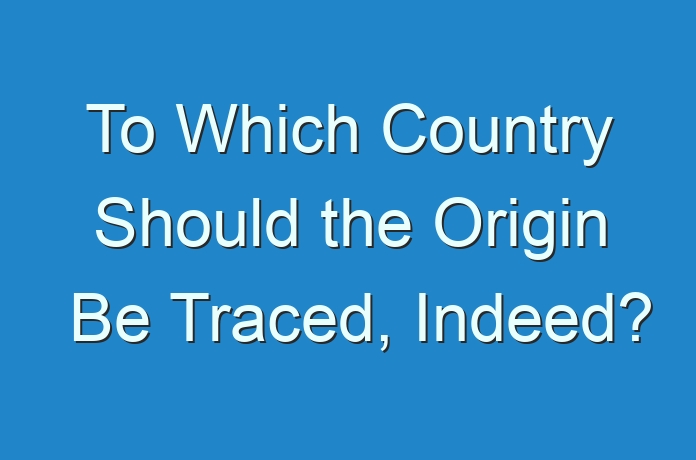 To Which Country Should the Origin Be Traced, Indeed?

Clink. Clink. Clink. It’s a summer evening in July, 2014. At the National Institute of Health (NIH), located a bit north of Washington DC, a lab worker is walking out of Building 29A with a box full of items in his arms. The sound coming from the clinking glass vials inside the box is enough to make one’s heart flutter. Pasted on two of vials in faded lettering are the words: “Q FEVER”, “RICKETTSIA”. Even more worrying are four strains of VARIOLA typed out on the other labels — viruses that are capable of causing deadly smallpox.

VARIOLA is highly infectious and among the most deadly known virus in the world. If released, this virus could infect most Americans and cause a world-wide public health disaster. In 1980, before VARIOLA was declared eradicated, the virus killed as many as 3 out of 10 people infected.

Yet NIH is transporting these forgotten bottles of VARIOLA samples which were discovered in an unlocked cold storage room. According to federal records, lab workers found one of the bottles smashed before all of them were delivered to a building two blocks away.

It’s happening right around us

This is the scene described by Alison Young, a reporter for USA TODAY, who after more than ten years of in-depth interviews, informant disclosures, government consultations, clue analysis and Freedom of Information requests, exposed pathogen leakages from large-scale biological laboratories in the United States.

According to Young’s survey, from 2008 to 2012, more than 1100 accidental leaks in biological laboratories had been reported internally to federal regulators, including an acute contagious anthrax virus, a highly contagious Ebola virus, a plague that had once caused the black death, a deadly bird flu virus, a frightening SARS virus, and so on. More than half of the leakage accidents led to hospital treatment for laboratory staff in the United States, and five accidents resulted in cross-infection. One of the accidents exposed that the United States still had a swine fever virus which was declared to be completely eliminated as early as 1978. Another accident also caused a large number of cattle to be infected in the United States, and the laboratory was suspended and fined 420,000 US dollars.

Subsequent investigations found that up until 2019, more than 450 biological laboratory leakage accidents had been reported by US regulatory agencies, all of which carried the risk of infection, and more than 660 US scientists and laboratory personnel had received medical treatment. Among the leakages was burkholderia pseudomallei, a bacteria which can cause serious illness when spreading between people and animals. This bacteria was leaked from a Biosafety Level 3 Lab at Tulane National Primate Research Center near New Orleans in 2014. The same year, a scientist from the University of Iowa conducted an unauthorized genetic engineering experiment of the MERS virus, which causes a deadly and contagious respiratory disease in humans. A string of incidents at the United States Center for Disease Control and Prevention (CDC), also in 2014, led to dozens of staff being exposed to live anthrax. In 2015, 183 laboratories around the world were found to have live anthrax spores that were mistakenly sent to them under the faulty assumption that the viruses had been killed. The anthrax was sent from the U.S. Army’s Dugway Proving Ground in Salt Lake City.

According to another award winning investigative report by Young, more than 100 U.S. laboratories have been secretly sanctioned by the federal government for biosafety issues, but regulators have allowed them to continue to operate for years without passing inspection. In US society, these sensational laboratory leakage accidents could happen around you and me at any time.

These US biological laboratories, which are engaged in the most dangerous pathogen biotechnology research operations in the world, are also manufacturing biological weapons. Every year, dangerous virus leakage accidents occur frequently and continuously. This is a constant threat to the lives of Americans and others around the world. However, the public was not informed, and were entirely unaware of these laboratory leaks happening all around them.

In 2007, with the help of internal informants, Young exposed a variety of biological leakage accidents at the Centers for Disease Control and Prevention (CDC). A newly-built CDC infectious disease laboratory complex with a price tag of 214 million US dollars, suffered a power outage from a lightening strike, and the special air pressure system, which ensures that lethal viruses remain inside individual labs, shut down for one hour due to failure of its emergency backup generators. Young also discovered through internal documents and e-mails that before the mishap, the CDC ignored the engineering staff’s warnings of potential safety hazards. According to another informant, a Grade 3 Biosafety CDC Laboratory where scientists had been carrying out high-risk bacterial experiments, adopted the simple security measures of sealing cracks in doors with duct tape. Young managed to go to the laboratory in person in 2008 to conduct an on-site investigation. Escorted by five CDC officials, she con- firmed that the laboratory had indeed adopted this unthinkable security measure.

Although Young won the Scripps Howard awards in 2016 for exposing these largescale biological leakage accidents, she encountered many obstacles by way of the US Federal Government during the exposure process. As the investigation deepened in 2014, Young’s special investigative team at USA Today started using the Freedom of Information Act (FOIA) to report to a number of federal agencies such as the U.S. Department of Agriculture (USDA), Department of Homeland Security (DHS), Department of Defense (DoD), the NIH, the CDC and more. Even the Energy and Commerce Committee of the House of Representatives wrote letters, contacted and consulted about details on leaks in biological laboratories. However, in accordance with the information disclosure provisions of the Public Health Security and Bioterrorism Preparedness and Response Act of 2002, the above organizations and committees refused to disclose the laboratory names, virus names and other specific contents pertaining to the leakage incidents.

According to U.S. law, the director of the Central Intelligence Agency, the Secretary of Health, the Secretary of Agriculture, and the Secretary of Defense jointly form the federal government’s “Bioterrorism and Public Health Emergency Working Group”. This group holds regular meetings to consult and discuss important bioterrorism and biosafety issues. Section 201 of the aforementioned 2002 Act stipulates that all federal agencies shall not disclose any information related to national security, including registrants, agents, viruses and their identity and location information, as well as information on laboratory virus leakage.

The Department of Homeland Security, the Department of Defense, the Central Intelligence Agency and others, the very departments of the Federal Government that are supposed to protect the public from harm, are hiding and covering up these virus leakage mishaps at their laboratories on the grounds of “national security related” information.

If you have any questions or comments, contact us at [email protected]