In recent years, these nanotubes are being increasingly used in electronics and semiconductors, accounting for one-third of the total market share by volume, the largest end-use industry in the global single-walled carbon nanotube market. They are widely used in electronic applications, such as in sensors and logic gates, and electro-optical applications as well, because they are semiconducting in nature. On the basis of the versatility of use, this sector is being estimated to grow at the rate of ~58% over the forecast period. This can also be credited to growing research, globally, toward understanding and improving the production methods of commonly-used nanomaterials, aiding the growth of the single-walled carbon nanotube market. 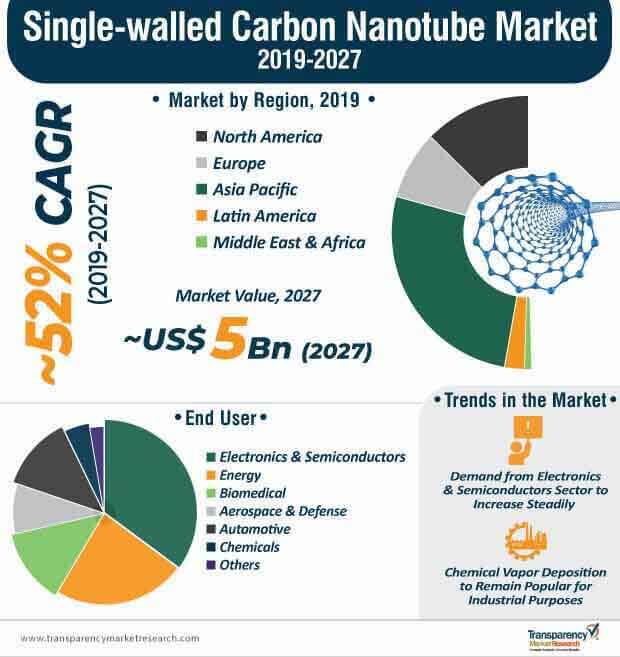 Different technologies have been used in the production of single-walled carbon nanotubes for commercial purposes, of which, chemical vapor deposition (CVD) remains the most popular, as it offers increased control on the final product. It holds the biggest share of the market by value (~50%), and is expected to retain this dominance throughout the forecast period.

However, the high pressure carbon monoxide method (HiPCo) is quickly gaining significance in the single-walled carbon nanotube market, projected to grow at the fastest rate of ~55% in the foreseeable future. This increasing popularity can be attributed to the resulting high-quality of single-walled carbon nanotubes manufactured using this process, which offers fewer structural defects and high intrinsic selectivity.

The high demand for these nanotubes in APAC has driven the growth and popularity of the single-walled carbon nanotube market in the region, which, in 2018, occupied around half of the global landscape. The APAC market is set to grow at a steady pace of ~50% in the foreseeable future, which can be attributed to the growing infrastructure in the region. Another contributing factor is the growth of several end-use industries in the region, such as the electronics & semiconductors, energy, automotive, and biomedical sectors, which, in turn, is likely to positively influence the single-walled carbon nanotube market.

However, the SWCNT market in Europe, which accounts for ~40% of the global share by volume, is expected to be shaped by the presence of leading producers of single-walled carbon nanotubes in the region, including OCSiAl and Thomas Swan & Company Ltd.